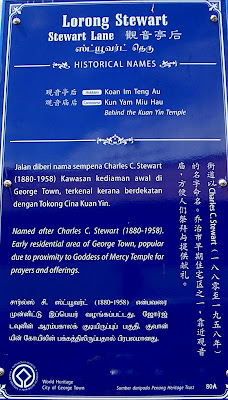 It was reported that the Lane was named after a Stewart, called Charles C Stewart (b 1880-d 1958). Stewart is great name in UK, particularly Scotland,there are Stewart Society all over the world, the names related to Scottish royal families. Some of the English and French royalties have some blood connection with the name. Stewart is taken from the word Steward, it become "Stuart" in France. I tried to obtain more detail about his background, but only managed to get some. We do not know why the lane was named after him. He was a civil servant of Strait Settlement in Penang.

Stanley Toft Stewart(1910-1992)
Charles C. Stewart (1880-1958)was the father of Stanley Stewart who was the District Officer in Balik Pulau. His son's full name is Stanley Toft Stewart (b. 13 June 1910, Penang – d. 9 February 1992, Singapore) was a long-serving public official in Malaya and Singapore who achieved many firsts. At the pinnacle of his career he was the head of Singapore's civil service, and after representing Singapore as high commissioner to Australia he became permanent secretary to the Ministry of Foreign Affairs.In late 1934 he earned the distinction of becoming one of the first two Asians recruited to the new Straits Settlement Civil Service. He worked in the Treasury then the Land Office before becoming assistant district officer for Butterworth in 1936. From 1939 he held the same post in Balik Pulau, Penang Island, and remained in office under a Japanese superior during the occupation.

After WW2 liberation Stewart was made district officer of Balik Pulau, became the first local man promoted to the Colonial Administration Service in 1946, then returned to Butterworth as district officer in 1947. He was an official member of Penang's legislative council and belonged to its war executive committee during the Emergency (also chairing the district committee), though Butterworth stayed largely peaceful. In 1952 he left Penang to become deputy chairman of Singapore's Rural Board.
(http://infopedia.nl.sg/articles/SIP_1448_2009-02-16.html)

Anyone know the history of Charles C Stewart ? he lived long until 79 years, what is his contribution to Penang that a road was named after him? 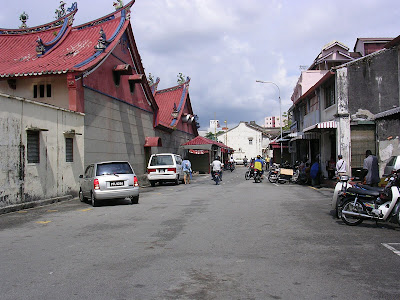 Stewart Lane is a short lane between Muntri Street and Pitt Street(now Jalan Masjid Kapitan Keling),it is not really a straight road, but from Pitt Street entrance just beside the temple, it lead to the nameless lane,which Chinese called Sampan Hang(or Sampan Lane),it suddenly turn right and go straight to Muntri Street(南華醫院街 )/Love Lane(愛情巷) junction. The area at the entrance is a business area, mainly related to the temple activities; selling religious materials e.g. joss sticks, joss papers (金紙)etc. Other area of Stewart Lane is mainly residential houses, but currently there were some isolated case which have used it as shop.

At the corner near the Sampan Hang, there are few houses which are under dilapidated condition. 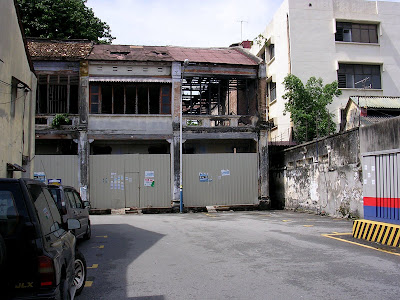 Except the one house with blue door, other houses in the row are dilapidated. I once have a friend staying here, but after the abolish of Rent Control Act, they have shifted. The houses are left in unrepair condition; either the owner has no money to restore it as the house dilapidated due to the ages of house, or it was intentionally left in the condition so that an allocation or development approval can be obtained. It is an eye sore for the heritage city, the MPPP should not has allowed the condition to continue. There must be a legal requirement for the owner to maintain the heritage houses,otherwise a statutory fund to take over the building and restore it. It is wise to start early. 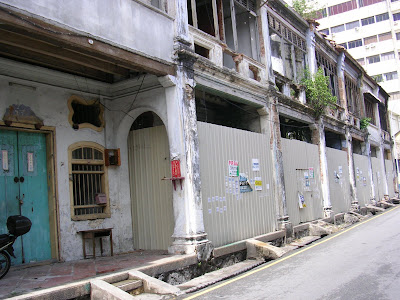 This row which after the lane of the red color clanhouse, is the begin of another row of double storey houses, which included 26A, Lorong Stewart, formerly the PHT's office(Penang Heritage Trust),now it has moved to Carnarvon Street. 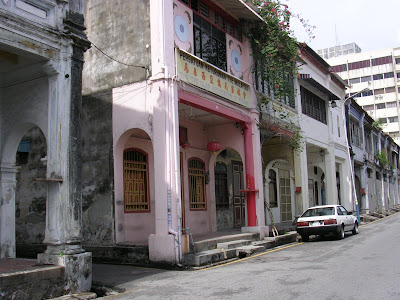 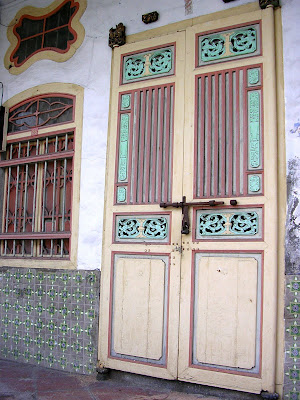 On the left, there is a off road Chulia Lane, the Chinese called it Tsap-chit-keng(十七間), literally in Hockkian dialect means 17 houses,it refers the prominent 17 houses in the road). The Chulia Lane lead to Chulia Street(牛干冬). 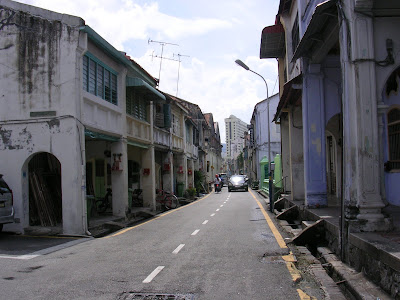 53, Lorong Stewart is a coffee maker, Kim Guan Coffee Factory. If you passed the building,you can smell the aroma of coffee. Established in 1988,its owner Mr Ong Kok Weng is 60 years. This is trade on traditional coffee making process, the business is now is considered a living heritage of Penang. The coffee beans are imported from Medan, Indonesia. Coffee beans are cooked in the wok for 45 minutes. They are spun and mixed ,while a huge fan will blow away the detached skin. When the beans turned light brown, it indicated properly cooked, and sesame seeds ,butter or margarine(depend on the grade,butter is better), salt and sugar are added to the required coffee grades. Sugar are added gradually, as excess sugar will affect the quality. The lower the content of the sugar,the higher the quality. The beans are then cooled and later grounded into coffee powder.

Get a bag of coffee powder if you are Penang coffee lover. It is much cheaper than Coffee Bean, and it is Penang's brand. 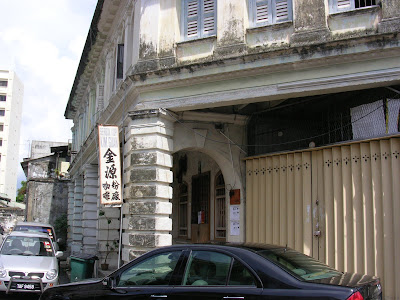 After the coffee maker, the road cross a side road, Lorong Chulia(or Chulia Lane) on the left. 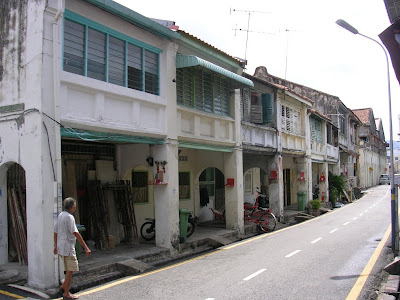 This is the beginning of the road after the off road of Chulia Lane junction. The 3rd shop is a trishaw repair shop. 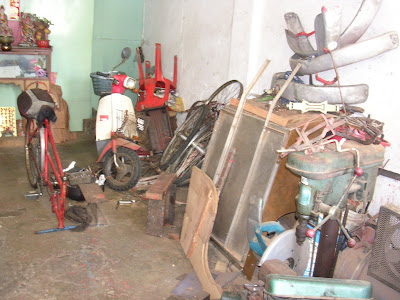 The third double storey shop, of the row that start from Chulia Lane , is the shop that make and repair the Penang famous trishaw(三輪車). It is reported to be the only trishaw repair shop left. The shop was closed when I visited. Trishaw is the main mode of public transport in early Penang ,it is still used today and now it become a must and popular ride for the tourists. called beca in Malay language, the trishaw is pedal-powered. In Munich, Germany there are modern version,which is electric powered. It is also called cycle-rickshaw. It replaced human powered rickshaw(人力車),which was popular prior to introduction of bicycle. 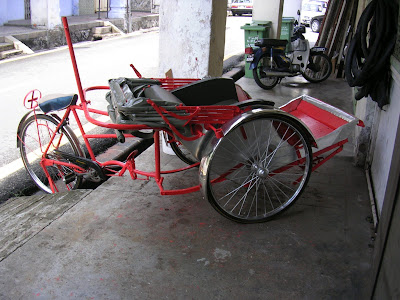 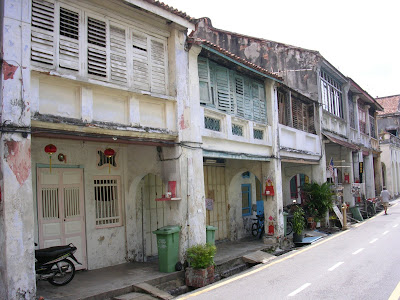 A house at 69, Stewart Lane, with advertisement that there are mahjong dice(some called Mahjong tiles) for sale. Is this shop originally from Love Lane? Mahjong (麻将) is a game for 4 players, originated from China. Mahjong is popular among the oversea Chinese, especially the old generation, it was reported that it is good in stimulating the mental activities of the brain. 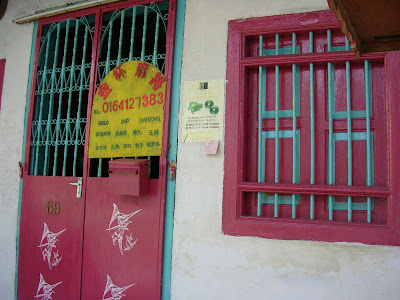 A green bungalow proudly stand at the middle of Stewart Lane 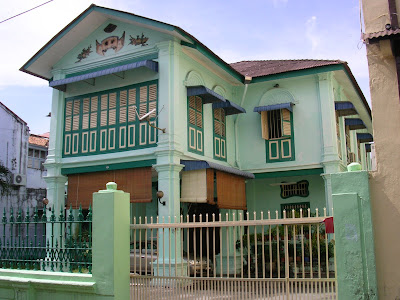 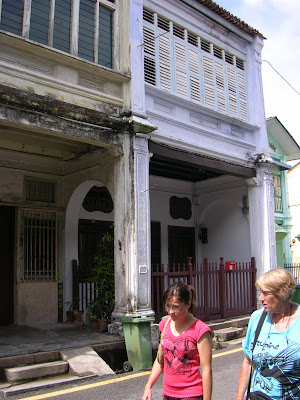 The end of the Stewart Lane, end at Love Lane junction, which corner the Hotel, Wan Hai Hotel(环海旅社),Love Lane. 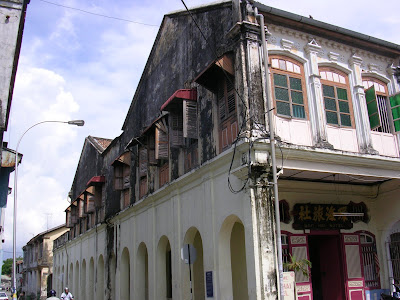 “Grant Deed” of 36, Stewart Lane was dated 1897. Can the street be named after Charles Campbell Stewart, who was only 17 years old(born in 1880)? The person must be earlier than him, may be his father or grandfather? or may be not named after a local Eurasian, but a stateman or personality from UK? . Can it be Charles William Stewart (1778–1854) later Charles William Vane, 3rd Marquess of Londonderry ; or Charles Stewart , a Scottish-born American merchant and customs officer who was involved in the Somersett Case which effectively led to the outlawing of slavery in Britain in 1772.? .........