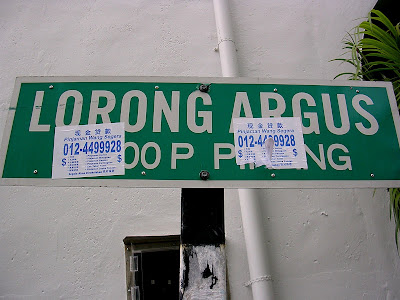 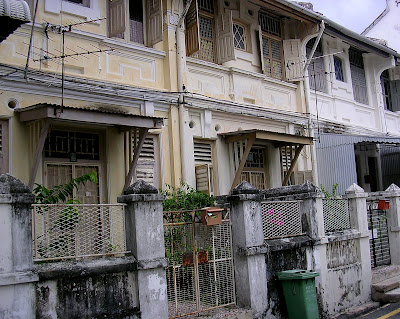 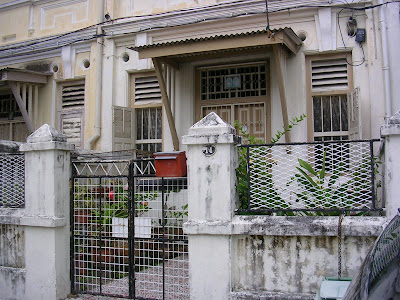 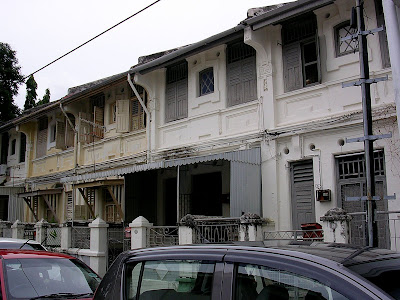 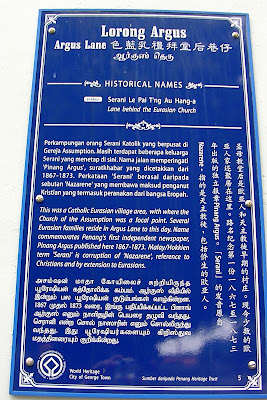 The road Argus Lane(or Lorong Argus in Malay Language) is the off road of Love Lane. It is the lane of the lane. Chinese called it Sek-lân-ní lé-paì-tn̄g-aū hāng-á((色藍乳禮拜堂後巷仔), literally in Chinese language it means lane behind the Eurasian church(the Roman Catholic Church, now Cathedral of the Assumptions). Sek-lan-ni or Serani means Eurasian, people with mixed European and Asian parents.

It is located on the left side of Love Lane, if you enter the Love Lane from Farquhar Street.

The Argus Lane was named after Penang's first independent newspaper, Pinang Argus,published at the Argus House here from 1867-1873. I try to trace the where about of the Argus House, but failed. There was the Catholic Eurasian village here, behind the Church of Assumptions, but now only shops and houses are left, village is no more there. The church is located at Farquhar Street, but with the back entrance at Argus Lane.

Serani in Malay language and Hockkian dialect, means Eurasians, which was a corruption term for Nazarene. Nazarene is someone from Nazareth. Nazareth is the capital and largest city in the north district of Israel. Arab Christian make up the majority of the population. Jesus was born in Nazareth, and the place become center for Christian pilgrimage. Malaysia and Israel has no diplomatic relationship; but Malaysian are allow to visit Israel on religion pilgrimage, entry through Jodan and Egypt. But lately the visit is now banned by the government due to security reason. Why the early Penang named Eurasians from the word Nazarene, people from Jesus birth place? it may be it is difficult for the local Chinese to pronounce the word Christian, as Eurasians are Christian, mainly Catholic. Christian are followers of Jesus, who is born in Nazareth. He is a Nazarene, and Christian Eurasian are Nazarene, thus as it was not easy to pronounce Nazarene in Chinese tongue, it become Serani....

Look at the road sign, the signage was pasted with two pieces of printed paper materials. It is the promotional material of money lenders or Ah Long as called by local Chinese. Ah long are normally illegal money lender or loan shark , who provided micro credit with high interest rate. They will use violence or criminal act to reclaim their debt from the defaulters. One of the way is to write big letter words with red ink on the wall of the defaulter's house, in threatening tone to indicate to the neighborhood that the person is their debtor; or just simply pour the red paints all over the house. Red color means if you still not repay the debt, you will be death, it is a warning sign. The poster or promotional printed materials are pasted everywhere, lately may be due to the financial crisis it become bigger and more colorful.