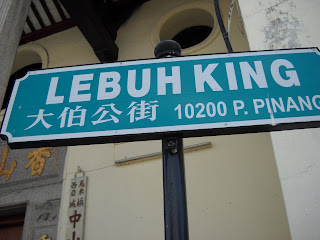 King Street( 大伯公街) is between Light Street(莱特街) and Chulia Street(牛干冬). It was named after King George III(1760-1820). The Chinese called it with various names,depending on location. King Street is located within the Georgetown Unesco World Heritage historic core site. It is within the original grid laid out by Capt Francis Light, the founder of George Town.

(i) Kau-keng-chu-au(九間厝後): Between Light Street and Bishop Street. It literally means at the back of the 9 houses. The name is referred to 9 terrace houses,with their back to King Street and their frontage to Penang Street. Yeap Chor Ee first house is located at 4, King Street,now open as The Sire Museum Restaurant.

(ii) Kuin-tang-tua-pek-kong-kay(廣東大伯公街): From Bishop Street to China Street. This part was the heart of Cantonese community.A number of Cantonese association, clan house and temple are located here.One of them is the Cantonese Tua Peh Kong Temple.

(iii)Ku-hock-seng-kongsi-kay(舊和勝公司街): From China Street to Market street. Ho Seng Secret Society used to have its base at 53, King Street,next to Poe Choo Siah.

(iv)Kelinga- kay(吉寧仔街) : From Market Street to Chilia Street. It was inhabited by Southern Indian who were dock workers in the Penang habour. The portion is within Little India.

The road signage of King Street, between Light Street and Chulia Street. Noted the Tamil wording. It is located at Kelinga- kay(吉寧仔街),within Little India. 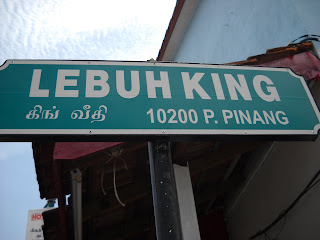 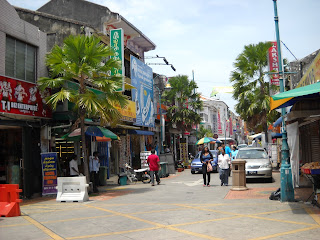