It was initially called Malabar Street, after Malabar Indians.Malabar is a region between Western Ghats and the Arabian Sea. This part of India was a part of the British East India company controlled Madras State,when it was designated as Malabar District . It included the northern half of the state of Kerala and some coastal regions of present day Karnataka. Malayalam is the chief language of the region

By 1798, it had already acquired the name Chulier Street, as it was then written. Until 1803, Chulier Street reached only till Love Lane. When Chulia Street was extended, the section beyond Love Lane was then known as Chulier Road. Today the whole stretch is known as Chulia Street, or Lebuh Chulia. This name is derived from the old Chola kingdom, and like Malabar, refers to the early Indians that settled there

The Chola Empire was ruled by a Dravidian Tamil dynasty of that name that ruled primarily in southern India until the 13th century. The dynasty originated in the fertile valley of the Kaveri River. Under Rajaraja Chola I and his son Rajendra Chola I, the dynasty became a military, economic and cultural power in South Asia and South-east Asia, including large part of Malaya and Indonesia. The old Chola country comprised the region that includes the modern-day Tiruchirapalli District and the Thanjavur District in Tamil Nadu.

From the beginning of the 18th century, after Malacca fell into Portuguese hands, it was closed to Muslim trade. Tamil Muslims traders or Chulias, originating from the Coromandel coast, started settling in Kedah. And when Light established a trading post in Penang, they began to move from Kedah to the island as well. Malayalee immigration to Penang can be divided into two waves. The first wave(1786-1950) was a mix of (i) voluntary individual immigrants, including those who came as traders and (ii) convict labour brought in to Penang after it became a penal settlement for India in 1789. The second wave (1920-1957)was made of educated young men who came voluntarily to the country in search of employment opportunities, primarily in white-collar occupations.

Chulia Street had also been previously known as Kling Street , like a similarly named street in Singapore. Indian Community strongly felt that "Kling" had taken on a degrading connotation. It had become a socially undesirable term, referring exclusively to the Indian coolies /convicts who were considered the lowest of low in Strait Settlement.

In 19th century, all Hindus from Madras and elsewhere in Southern India were known as Klings in bazaar Malay. But over time, the term kling became restricted among the English-speaking residents to mean the coolie class, Tamil or Telegu. The Peninsular Malays though still spoke of Indians of all classes from the Coromandel Coast in Southern India as Orang Kling, and the Madras presidency as Negri Kling.

Kling had its origin in the term "Kalinga", the ancient empire of Southern India which traded with the Malay Peninsula and Java and Sumatra. Kling is a corruption of Kalinga called by local Malay.In Penang, the local Hockkien however called the South Indian, “ kelinga”, which is much closer to Kalinga than Kling. The local Chinese still called the South Indian as kelinga or ke-ling-- jan in Cantonese. Chulia street(east of Chulia street which is within the original grid) and King Street(south of market street), and now the Market Street is called kit-len-a-kei(吉寧仔街).

The earliest immigrants from Southern India were known to the first European merchants and officials as the Chulias, who were mostly Muslims. Presumably, the later European residents and the Chinese settlers heard the local Malays calling the Hindus Klings, and followed suit.

Kalinga was an early kingdom in central-eastern India, which comprised most of the modern state of Odissa / Utkal, as well as some northern areas of the bordering state of Andhra Pradesh. Kalinga was an independent kingdom blessed with prosperity. During 260 B.C Asoka, the great emperor invaded Kalinga. This war was a turning point in the life of Asoka. The Kalinga war saw huge loss of lives and bloodshed. This massacre forced Asoka to resort to Buddhism. Kalinga Kingdom is a glorious kingdom in history of India. The Kalinga is not degrading name, but it is an honour to be named after Kalinga. The name did not refer only to the coolies or convicts, it refer to a great historical kingdom. We should be proud of the name kalinga, and remove the misunderstanding, the one who disgrace the name is the one who do not know history.

The Chinese Hokkien divided the Chulia street into 3 parts: 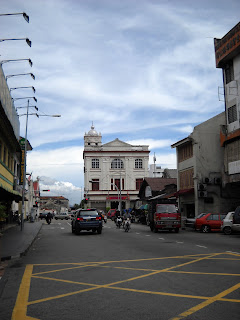 (View of the junction of Beach Street & Chulia Street. The building is the fire station)

Chulia Street was also extended seaward during 1888-1904. The resulting road from the central fire station(built in 1909) to the sea was called Chulia Street Ghaut. Until then, there was a pier where Chulia Street ended(just after Yeoh kongsi). Chinese called it 姓楊公司街( seh-eiow-kong-si-ke,meaning Yeoh kongsi street), 柴路頭(cha-lo-thau,meaning firewood was sold there before Maxwell Road), 吉寧仔街路頭 (Kiet-leng-a-ke lor-thau,meaning entrance or beginning of Chulia Street)大水井 (Toa-tsuí-che, meaning big well after big water tank there,the road also include Pitt St (middle).

Chulia Street was initially occupied by Indian, both Hindus and Muslims. The Hindu Indian was later concentrated on the region inside the grid(now Little India). It was the Chulias Indian Muslim that have great influence to the character of the original Chulia Street within the grid. The most notable heritage here are Nagore Durgha Shrine, Masjid Kapitan Keling(land given in 1801 built only in 1910), and Noordin Family Tomb. The Chinese began moving into Chulia Street only after the end of the 19th century when Indian Muslims population in Chulia Street declined. It may be due to their moving to wakaf land near Masjid Kapitan Keling , Pitt Street and other new development area in Penang e.g. Kampong Malabar and Chowrasta Market. The street was then occupied by Chinese traders. Han Chiang Ancentral Temple(built in 1870) of Penang Teochew Association is the only clan temple at the original Chulia street within the old grid. Yeoh kongsi(楊氏霞陽植堂),built in 1841,is with address 2, Chulia Street at Chulia Street Ghaut. It was reported at the time when it was built, it was located right on the waterfront and has its own jetty. But reclamation created Victoria Street, and added new land in front of the temple across Victoria Street.


3. West of Love Lane: 牛干冬 Gu-kan-tang, which was derived from Malay words "Kandang Kerbau", which literally means the cattle pen in Malay(kandang).