Beach Street
Beach street is in the heart of Georgetown, a financial district. It is also used to be commercial hub with European office and retail and wholesale stores.

Beach Street is between Light Street round about, the Victorian clock tower, near Persiaran King Edward to the Jalan Dr Lim Chwee Leong. The street formerly ran along the shoreline until the construction of Weld Quay.

It is officially called Lebuh Pantai in Malay. For the local Chinese, it is divided into 6 parts, namely:-

This part of Beach Street between the clock tower until China Street is called Ang Mor Thau Kor Kay by the local Chinese. Ang Mor is literally means red hair , the local name for the Westerner. Thau Kor means warehouse. Kay means street. Ang Mor Thau Kor kay literally means "the street of warehouse of the westerner". The upper or north Beach street is located at the financial hub of Penang. There are many banks, domestic as well as foreign bank. In addition to that there are many money changers along the street. The Beach street is intersected with Union Street(beside Chartered Bank), Bishop Street, Church Street, until China Street(beside RHB Bank).

At the turn of the 19th century, the northern section of Beach Street and the adjacent Bishop Street were the ‘high street’ where the ‘modern’ European emporium and stores selling imported merchandise were situated. Among the early foreign companies that located their offices on Beach Street were the Netherlands Trading Society, the Hongkong & Shanghai Banking Corporation (HSBC), the Chartered Bank, Boustead & Co., Guthne & Co., Caldbeck & Macgregor, Behn Meyer, Sandilands & Buttery, G.H. Slot and the stores of Pritchard & Co., Whiteaway, Laidlaw & Co., and others. This area is now still the banking hub of the Penang. Hongkong & Shanghai Banking Corporation(HSBC) is now Hong Kong Bank, Chartered Bank is now Standard Chartered Bank, these are the two banks still remained.

Beach Street remains as one of the longest streets and is well known as Penang banking district. Most of the heritage buildings remained are now headquarters of premier banks in the state. The historic commercial centre was segmented into the banking and trading areas related to port activities which included shipping companies, the import and export trade, and the wholesalers who dominate the southern section of Beach Street until now. The warehouses and godowns extended from Beach Street to the sea. By the 1880s, there were ghauts leading from Beach Street to the wharf and jetties as Beach Street receded inland due to land reclamation. A new waterfront was created at Weld Quay, where commercial buildings sprang up.

At the end of the street is a round about with a clock tower built in pre war days. This end lead to Light Street and Esplanade on the left, and on the right. The immigration office is located at the left corner of the street leading to Light Street. On the right the immigration station is a small police station and the next building is Standard Chartered Bank, which is a heritage building. Opposite the Standard Chartered Bank is the Malay Chamber of Commerce/Muslim Religious Council building.

After crossing the side road Downing Street where the main post office is located, the corner heritage building is the RBS Gallery(9, Beach Street) owned by RBS(formerly ABN-AMBRO Bank). When it was built in 1905, it housed the Netherlands Trading Society. Later it was taken over by ABN-Amro and recently it changed hands to the Royal Bank of Scotland or now formally known as RBS. The restoration of RSB premises was the winner in the Specialized Project category at the Malaysia Property Award 2008. This recognition was organized by FIABCI Malaysia.

The Hongkong Bank followed. You cross another side road, there was the Ban Hin Lee Bank, a Penang owned bank but later merged with Southern Bank, and now owned by CIMB. At the end of the row is India House, another huge art deco building. Then you cross the Church Street Ghaut.

The former headquarters of OCBC bank (Overseas Chinese Banking Corporation) with its trademark logo of a Chinese junk is at the other side of the street. Now, the building is used by a company trading securities. This block is truly nicely restored.

Among the local businesses that were established here during this period were H.M. Noordin, Tiang Lee & Co., Guan Lee Hin Steamship, Tye Sin Tat, Pinang Sales Room, Koe Guan and others. Penang’s first petroleum lamps were installed on this section of Beach Street by Huttenbach & Co. Today, this area has lost its glory, as Chinese traders have moved out and Indian retailers are moving in. Ghee Hiang is the few old name that still remained.

At the left side of the street, there used to be a bus station for City Council bus.

The famous Ghee Hiang biscuit shop, which sell tau sar pneah(or green bear pastry)and Ghee Hiang sesame oil, is also located at the street, the row toward Chulia Street.In the old days you need to book in advance to purchase the biscuits. But due to more new biscuit shops opened, there is keen competition in the business segment. The shop forced to change their strategy , and opened retail outlets at the Burma Road and Macalister Road, near Anson Road junction. Ghee Hiang's tau sar pneah used to be must buy for tourists; and their sesame oil is a premier choice of the mothers in confinement.

At the other end it a traffic light junction of Chulia Street, where an old fire station is located.

Beyond the old Beach Street

Early to Mid 19th Century, land reclamation between 1880 and 1904 created the George Town that we know today, forever changing the character of Beach Street. Although it is no longer right at the beach, it still retains the name. Opposite the ghats, perpendicular to Beach Street, new roads were built inland e.g. Victoria Street, Pengkalan Weld.

Beach Street was also later moved out of the original Francis Light grid, extending its road until Sia-buai , intersecting by Jalan Magazine, and joined with Jalan CY Choy at the intersection of Jalan Noordin, which is the Chinese dominant commercial area 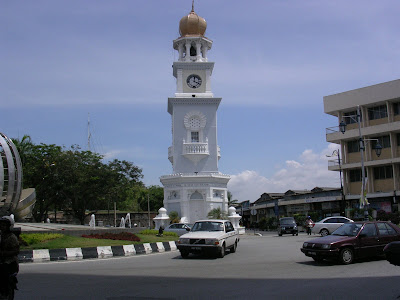 This is an old clock tower at the round about, there is also a steel sculpture of nutmeg nearby . 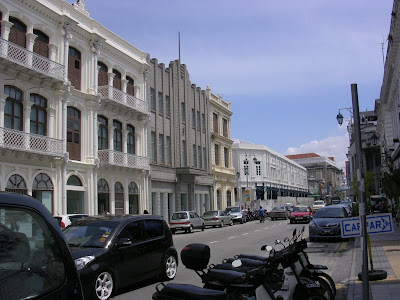 This row of heritage buildings are located at Beach Street 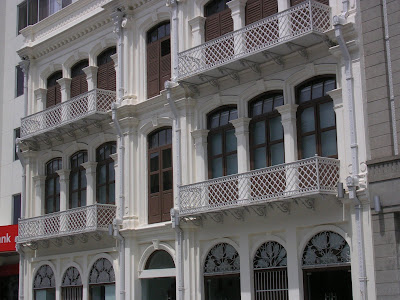 Look at the heritage buildings, the colonial buildings are beautiful; you will understand why Penang is declared as heritage city by UNESCO 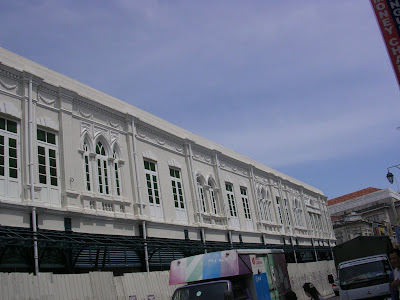 Some of the heritage buildings are under renovation 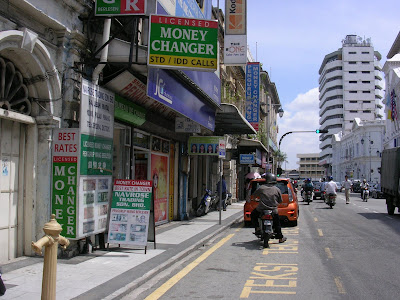 One of the money changers at Beach Street 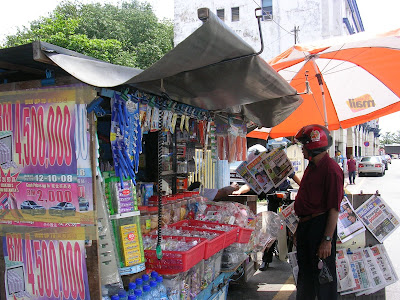 Not only financial institutions, this small stall at the side road is also doing good business.
Posted by Boon Raymond at 6:56 PM