Love Lane, what a lovely name for the street......

Love Lane or Lorong Cinta is the most romantic name given to the street. In Chinese, it is known as ai-cheng-hang(愛情巷) which means love lane. The word "ai-cheng" means love.

But Chinese also called the place other names, including Sek-la-ni hang(色蘭乳巷) which means Eurasian lane, name after the Portuguese Eurasian residents around the Catholic church there, the Cantonese called it 孖水喉街. The name in Cantonese means two water pipes. It was reported that there used to be two public water taps or pipes at the corner of the Chulia St/Love Lane junction. Now you cannot find the public water pipes there anymore.

The 1807 McCarthy Map shows the house of Mr Stamford Raffles, the founder of Singapore, at the location now part of SXI school ground. It was at the left corner of Farquhar Street/Love Lane T junction. Raffles arrived in Penang to work as Deputy Secretary to the Governor of Penang Philip Dundas from 1805-1810. In 1805, the colonial status of Penang was upgraded to Presidency, known as Eastern Presidency, a subdivision of British Empire. Raffles later found Singapore in 1819. Captain Francis Light's residence was at the current school ground of Convent Light Street, a well still remained there.

Only until 1877, The Town Survey Map of Georgetown 1877 showed the street name of Love Lane clearly stated in the map.

Love Lane is an old small side road, between Chulia Street (牛干冬/大门楼)and Farquhar Street (华盖街). The lane was first appeared in the map of Governor Leith’s Map 1803. Leith Street was named after him.

From the Chulia Street to Muntri Street, the portion of the Love Lane until Muntri Street (南华医院街) is called Lo-pan-miou-kai(鲁班庙街)by local Chinese. This is because there is a Carpenter's Guild(Lo Pan Ku Miou) established in 1865, at the left side of the street, beside the Shi Chung School. There are two row of shophouses, and a hotel; before the Carpenter's Guild. Followed the Shi Chung School is a row of double storey shops until the Muntri Street, at the end is a coffee shop. Opposite on the right is the row of shop/house, used to be 2nd hand book shop there in the seventy. After that is the empty land used as car park. After the car park, is a row of beautiful double residential houses, now converted into pub and a hostel(with the name Old Penang) for the back packers. The last row of shophouse before reaching Steward Lane(观音亭后巷)junction, included clanhouse, Soon Tuck Wooi Kwon(顺德会馆), established in 1838 and refurbished on 1928, the association is for people from Soon Tuck, Kwangdong. The clan came with male butchers or female domestic servant/mah cheh(妈姐)from China), and an old Wan Hai Hotel(环海旅社)at the end lot. The hotel has the narrowest five foot- way in town, at the Steward Lane side. If you want to know the love story of the Love Lane, Wan Hai Hotel should be able to tell you, if he can talk....... 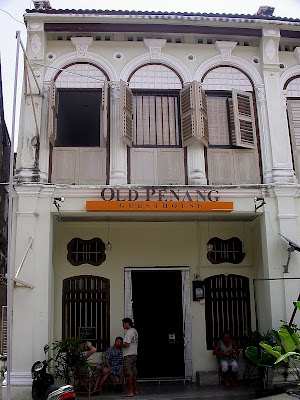 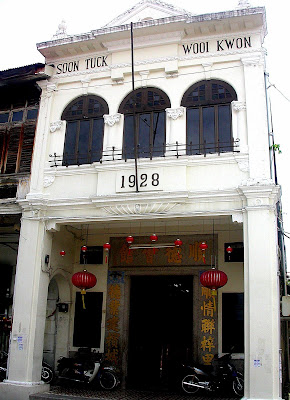 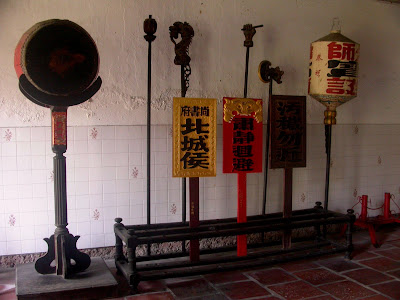 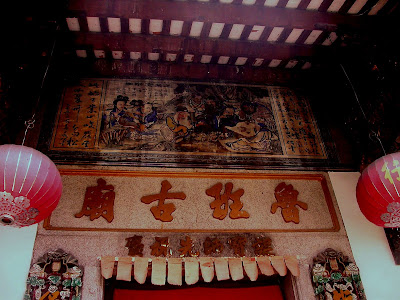 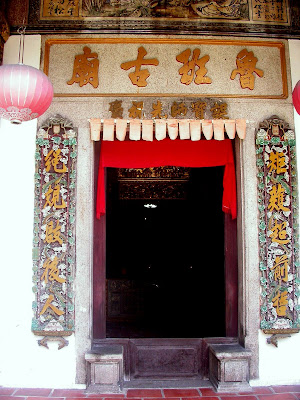 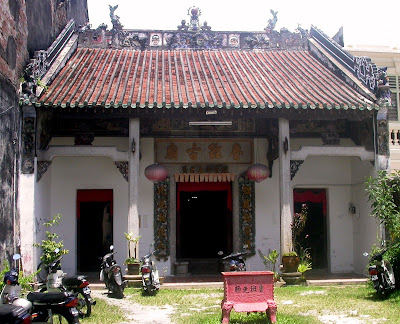 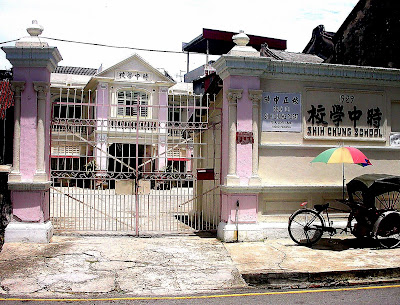 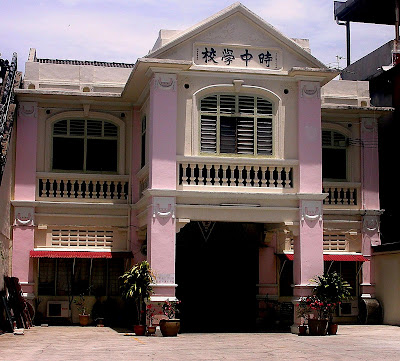 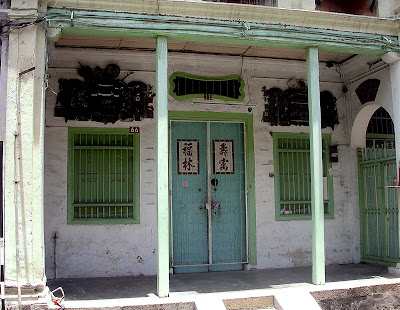 The portion from Muntri Street to Farquhar Street is called Si-chi-ka-lai-pei-tong-bung(十字架礼拜堂边) which means the side of the church, as the Church of the Assumption is at the entrance from Farqhar Street. The side entrance of the famous St Xavier Institution(SXI, 圣芳济学院) is at the left of the road. Before reaching Muntri Street, there are few double storey shophouses. Opposite the SXI's entrance is a side lane(Lorong Argus or Argus Lane), with a row of double storey residential houses. This is the place for the early Eurasian Catholic community.One of the building called Argus House, is the place where the Penang's first independent English newspaper, the Pinang Argus was published from 1867-1873. After the Argus Lane, there is a row of shops before reaching the junction of Muntri Street/Steward Lane. 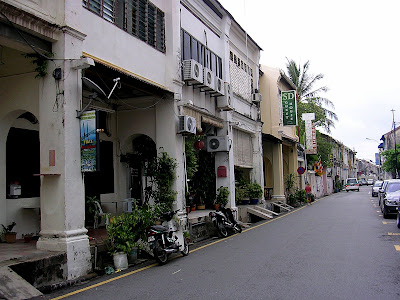 This portion is not an exiting part of the road, most of the road is occupied by the school (St Xavier's Institution or SXI) and church(Cathedral of Assumptions). There is however a row of residential double storey houses, some have converted into budget hotels for back packers.

We found one house at the row just after the Argus Lane, a beautiful decorated house with nyonya wall tiles and floor tiles. There is also a beautiful front door, carved with typical Chinese design. It is called Heng Heng. 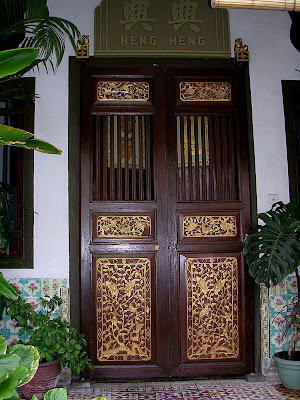 The Education Hub
Other than with the connotation of love, the lane is actually famous as education hub. The old saints and convent girls , must have fond memories of the lane. Opposite the SXI is the Convent light Street, there is an old saying that the SXI boys are always after the convent girls, and the Free School students go after the girls from St Georges. SXI was originally not at the current location, it was actually at the current location of Shi Chung School, and moved to current location on 1857. And the original site of Shi Chung School was currently part of the SXI. The original venue, 38 Love Lane was return to the owner(刘苑廷), which converted it to a hotel(Suchow hotel 苏州旅社), but it was destroyed during WW2 by Alliance warplane. SXI(occupied by Japanese armies) was also bombed and destroyed. After the war, while reconstruct the school, SXI bought the former place of Suchow Hotel, and become part of the school.

Look at the Shi Chung School, is it beautiful? it was established in 1908 by three Hakka(谢春生、梁碧如,戴欣然), initially was named as Chung Hwa School(崇华学堂), the current school premise was constructed in 1929. It was fortunate that Shi Chung School moved to the current site, otherwise it will be bombed. After the war(WW2), the school reopened on 1-11-1946.
There were another Chinese primary school here, Sinhwa school(新华学校)and Tai San School(台山学校), but they are no longer here now. Taisan School(台山學校, established by Toishan Ning Yang Wui Kwon(庇能台山宁阳会馆) in 1918, was stopped in 1952. LoPan Ku Miou or Carpenter's Guild was also the temporary premise for Shi Chung School and Tai Shan School. 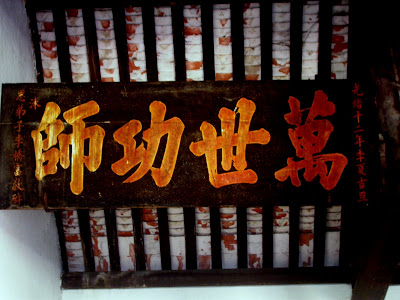 Wan Hai Hotel(环海旅社)
Immediately cross the Steward Lane and Muntri Street junction, is located an old hotel on the left, Wan Hai Hotel(环海旅社).The narrowest corridor or five foot way in Penang, on the side of the hotel at the Steward Lane. Walking into the corridor,and slowly walk to the end at Love Lane, you are like walking into the past of Penang. It was reported in the oldest day, people who landed at the port nearby, will stay at the hotel.

Listen carefully, the hotel may tell you about the love story of the past, and what happen in Love Lane. The love story of the Serani girl and the colonial staff who met at the Church of Assumptions each Sunday; the love story of SXI boy and Convent girls who met each other while walking to schools together in this lane; the story of the man and the girls in the hotel....... and moreover the beach is walking distance from Love Lane, just across the Farquhr Street, beside the Convent School. You can still hear the girls and boys are laughing at the beach? 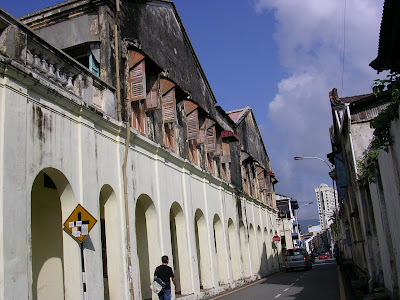 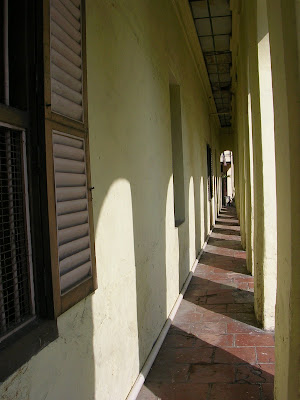 Just be still, and listen.....who said there is no love story in Love Lane? 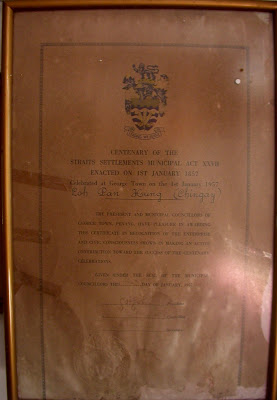