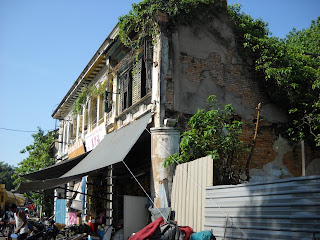 The shophouses at the right of the Maxwell Road(柴埕前), which used to be wholesalers for fruits 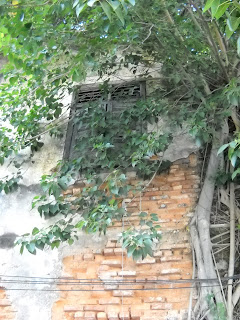 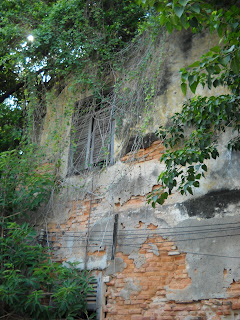 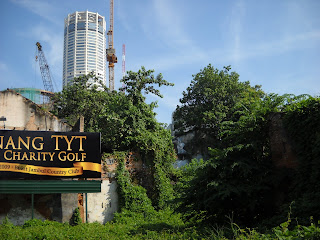 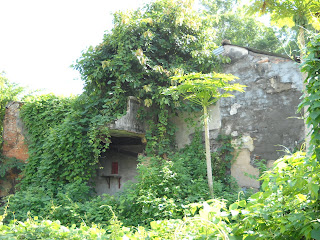 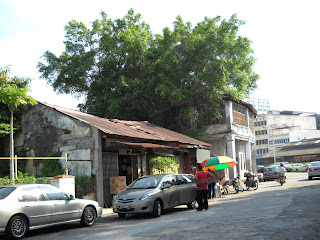 There is still one small sundry shop here 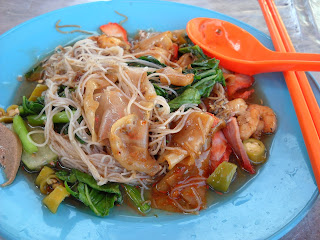 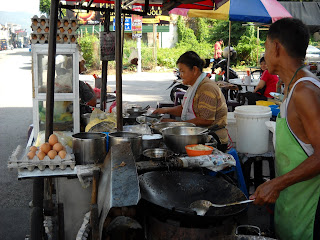 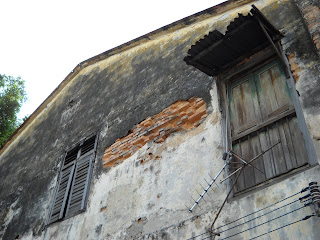 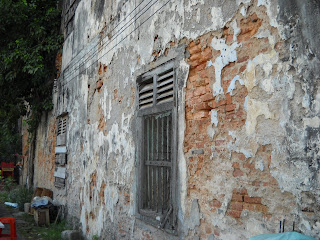 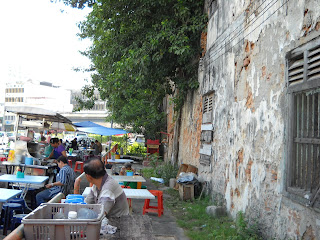 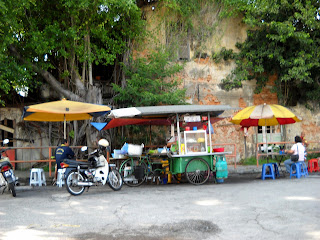 The street stalls at the end of Maxwell Road, near the Magazine Road 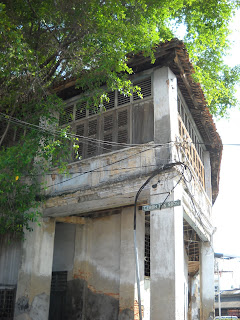 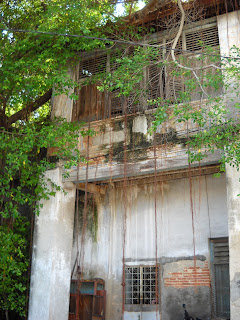 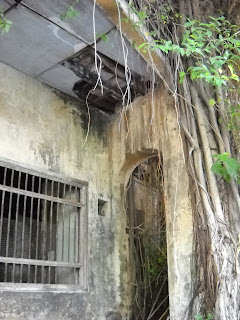 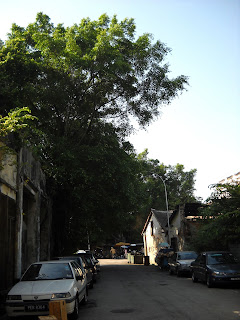 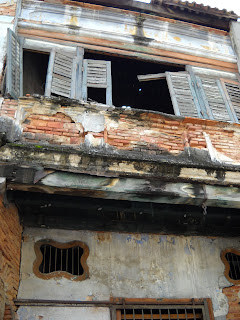 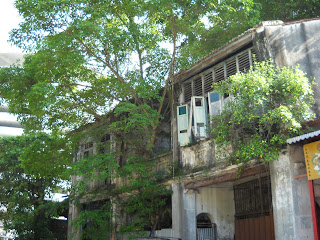 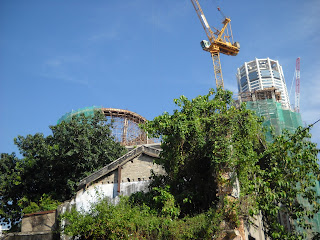 Development and heritage? a difficult choice... 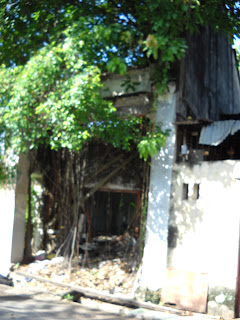 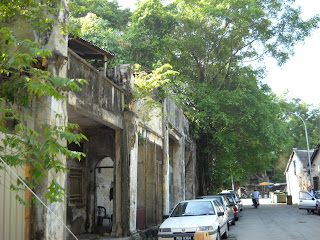 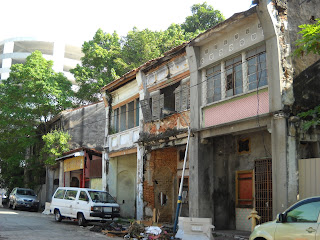 The view of the Tek Soon Street(柴埕後), waiting for the days.... 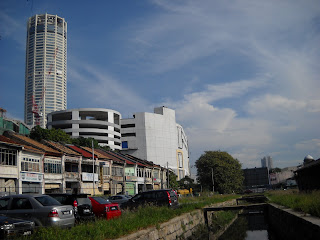 The view from the old Prangin market or sia-buai(社尾萬山),which has been demolished 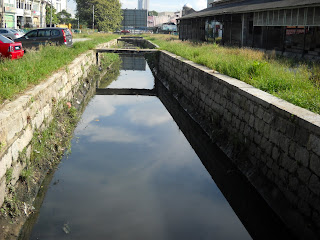 The Prangin river, where the traders used to upload the goods from the junks; is later become Prangin Ditch(港仔墘大濠溝), and now only a dirty drain..... 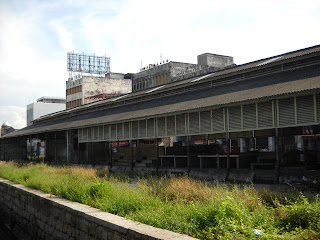 What was left, an empty building of the Prangin Market or sia-buai(社尾萬山). 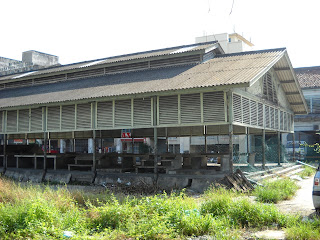 The empty market, with the building framework left.The historical living heritage of sia-buai is gone.....

Gladstone Road(火車路)is no longer there, I still remember each Sunday, dad will take us to grandma’s house at Paya Terubong. We will take a bus, Lim Seng Seng bus there(Green bus). Early in the morning at about 7-8a.m., we will wait for the bus at the bus stand in front of a coffee shop. Beside the coffee shop was the fruit shop at Sia-buai(社尾萬山), which was belong to my classmate’s dad. I cannot remember the name of the road where the coffee shop was located. The coffee shop and fruit shop are no longer there. From the coffee shop, if you go further there was a place where one of my classmate’s family used to dry their nutmeg, just at the back lane of Magazine Road. My classmate is Lim Hock Lye , I still can remember his name, a tall boy speak typical Hokkien with strong ascent.

From the round about of Sia-buai with 5 roads(社尾萬山交通圈), the Gladstone road go straight and joined another round about of 6 roads(六岔路交通圈). The Sia-buai round about was the joining point for Carnarvon Street(沓田仔), Prangin Road(now Jalan Dr Lim Chwee Leong, named after the father of Tun Dr Lim Chong Eu), Maxwell Road, Gladstone Road, Lebuh Mc Nair(港仔橫街). From Sia buai, there was a row of shop houses, before you reached the side road that connected to Magazine Road. Inside the side road, there used to have stalls that sell Teochew porridge, the one with stool on top of the long bench , where you can squat, these are the low income restaurant in those days. Across the road, there was another row of shophouses, a small factory, the end shop is a sundry shop, before you reached a hawker complex just beside the 6 road round about. The 6 roads are Penang Road(檳榔路), Magazine Road(頭條路), Datuk Kramat Road(柑仔園), Macalister Road(中路),Gladstone Road, Brick Kiln Street(now Jalan Gurdwara).Komtar and Gama Supermarket is not built yet. The distinctive building is the Cravan brand cigarette box advertisement above the Cravan Cafe Nasi Kandar Shop at the junction of Jalan Datuk kramat and Macalister Road. The Cravan Cafe was established in 1920. The site where Gama stand now is the empty field. I remember there was a Mamak stall selling bubor kachang( green bean porridge.) Now there is traffic junction of Penang Road, Datuk Kramat Road, Macalister Road, and Jalan Gurdwara; Gladstone Road is no more there....

In the opposite side of the Gladstone Road from Maxwell Road, there was a small petrol station, the store of Tai Hin hardware(at Maxwel lRoad), and row of shops you will reached a side road, should be Tek Soon Street(德順路).At the left side of the Tek Soon street are row of residential double storey houses. This side road will lead you to Great World Park, 2nd hand book stalls , and straight to Penang Road. Across the Tek Soon Street,there was a coffee shop, and few shop houses and then there was a walled workshop(owned by MPPP or TNB?) until Penang road. I hope my memory did not failed me on Gladstone Road.

All these places are no longer there, they had lost to the development of KOMTAR. Recently the Sia-buai, another Penang land mark was also lost. These are the places that were deep in my memory. They are the familiar places of my childhood, and especially Sia- buai, it was the place which is so significant to our life, especially people from the lower income group.

Maxwell Road, the road where once my primary school , Li Teik Primary School(麗澤學校) was located. There used to have a bus station for Lim Seng Seng(Green bus to Air Itam) , Boon Siew(Yellow bus to Jelutong and Balik Pulau), and Hin Company(Blue bus to Batu Frenggi and Teluk Bahang). There was two cinema, Paramount( for Hindu film) and Capital cinema(首都戲院)(for English film). There was another school, Chung Hwa Confucius Primary School(中華學校)together with the lower secondary school, just beside my school. In front of Li Teik Primary School, there were Laksa Assam and tang-hoon fish ball stalls, popular stalls for the students after school. Beside the Paramount Cinema, there was a very busy coffee shop,which turn into Jalan Ria, which led to Tek Soon Street. There was one cinema behind the coffee shop(name forgot). On the left was the famous and popular, Great World Park, inside the park was an open cinema,where without buying any cinema ticket, can still stand outside and watch the film show. There was a merry-go-round, popular with the children, and other amusement park activities. Beside Great world park, there was a Chinese cinema, Oriental cinema. All these had disappeared for the Komtar project.

The wholesalers at Sia-buai part of Maxwell Road((柴埕前)have gone, but there are some still operating their business there. Many have closed down, as Sia--buai market was no longer there. The Tek Soon Street end(柴埕後) also met the same fate, the buildings are waiting for their last day. Tek Soon Street is Chai-tia-aw(柴埕後), literally means behind the firewood yard. The area was the place where firewood was sold.

The street that had lost, took away my childhood memory.... and Penangite's heritage wholesale market....part of old Penang. It is a pity. We are forced to choose between development and preservation, and at the end development always win.....

Not only the street had lost, the Prangin River no longer a river; but a big dirty drain under Jalan Dr Lim Chwee Leong.

Today,Komtar is like an old lady standing alone in the old city of Penang,an eye sore to Penang people....it is difficult to renew or re-build it.

Regret, that Komtar should not have build in old Penang; it should have build in the new township.... now both are gone, heritage and development, and my primary school..... childhood...