There is Little India, there is Indian Muslim quarter, there is Eurasian quarter, and the Achenese area, where is the China Town?

There is no Chinatown in Penang.......the majority of the population is Chinese. There is a street with the name of China Street or Lebuh China(大街/路头), located between Pitt Street and Beach Street. Pitt Street now renamed Jalan Masjid Kapitan Keling, is the harmony street of Penang, with money changers, religion institution, jewelry shops, and association. It is a busy street. Beach Street is a financial hub of Penang, all the financial institution and wholesalers are there. It is situated within the core zone of George Town UNESCO World Heritage Site. China Street is intersected by Queen Street,King Street and Penang Street. Land reclamation extended the China Street to Pengkalan Weld(Weld Quay) at the end of 19th century.

It was reported that the street was established by the Chinese community leader from Kedah Capitan Koh Lay Huan(辜礼欢). He was the pioneer Chinese settler arrived with Captain Francis Light from Kedah in 1786, Light appointed him as the first Capitan China of Penang. He was also known as Che Wan in the official document.

The road was laid out not long after the earliest street,Light street and Beach Street. It is one of the oldest street in Penang, which is named after the Chinese inhabitants. Chinese Street was once facing the sea, when the shoreline was at Beach Street. It was commercial street for the Chinese, the goods from the boats and ships can download at the jetty nearby. It is called Tua-kay or main street by the local Chinese. The Beach street , from junction of China Street to traffic light junction of Chulia Street(where the fire station is located) is called Kang-a-khau(港仔口), which means harbour entrance, where the main shipping business was carried out.

At the head of China Street where it meets Pitt Street, is the Kuan Yin Teng Temple (Godess of Mercy Temple(廣福宮), jointly established by Hokkien and Cantonese, the oldest Chinese temple in Penang. The other end of China Street will continue with China Street Ghaut (Toa-ke-lo-thau,大街路頭 )where it was landing place for the China Street, it continues to Weld Quay. 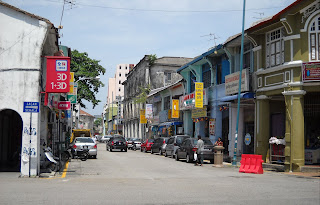 View toward the Beach Street at the King Street junction, the Yin Oi Tong building can be seen at the Penang street junction at the far end. 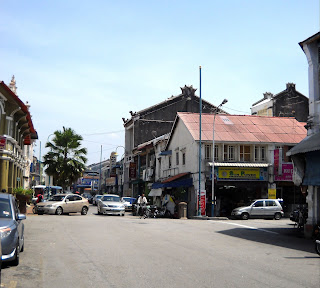 The view at King Street junction 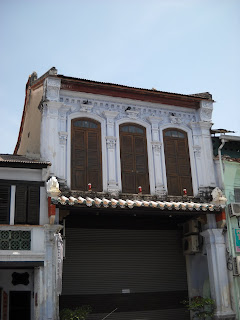 This shop located at 83, China Street with the name of Ching Hoe Ser(清荷社), used to be a bicycle shop even before the WW2, it was owned by my great grandauntie family. The shop has been renovated and used as Ching Loctus Humanist Space(清荷人文空间).Now it is an art studio, Alpha Utara Gallery.
Apha Utara Gallery画廊就设在大街83号清荷社。 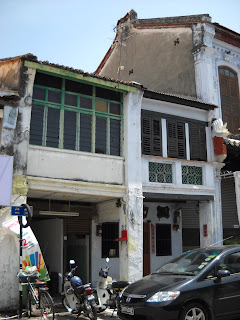 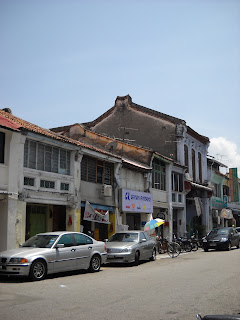 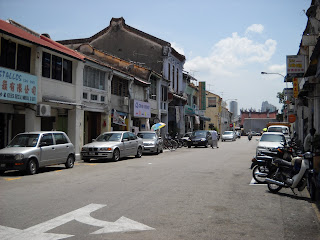 The view toward Pitt Street, after Queen Street junction, at the end is the Kuan Ying Teng temple. 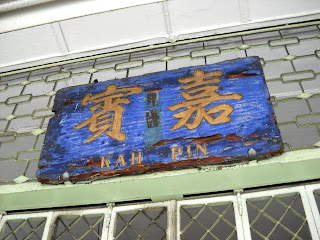 This old name board is unique, blue color. 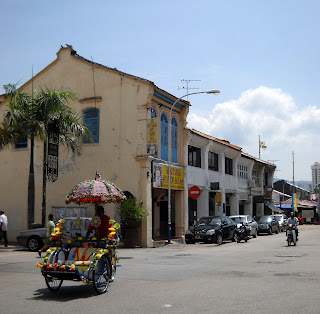 The view at the Queen Street junction 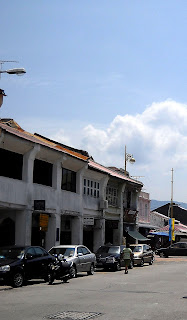 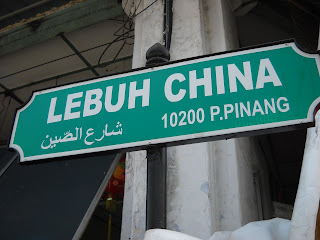 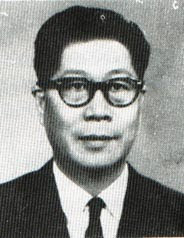 He is a doctor that I will never forget, and he is the only doctor that I visited whenever I was sick. Dr Yeoh is a good doctor in the old Chinese community of Georgetown, he opened a clinic in 1937 at 88, China Street(大街八十八号创杨清添药房),just opposite the Kuan Yin Teng Temple(廣福宮/观音亭). He named the clinic after his name, Yeang Cheng Hin Clinic(杨清添药房). The clinic is a popular clinic, as the clinic charged low consultation fee especially for the poor, at time it was given free for the case to case basis. I still remember he is not only a good doctor, he also give encouragement to the young patients from the poor community, motivate them to work hard, and do well in their study. He will collect stamps for his little patients. If you are lucky, some time you will get a foreign stamps. There were also sweets given to them. The most remarkable part is the doctor practiced discriminating pricing(a marketing concept by the marketing guru)long before Marketing was a subject in university. He charged less or even provide free medical service for the hardcore poor. I always remember him....a good doctor.

Dr Yeoh was born in Penang in the year 1908,eldest of two sons from the family of a merchant. His early education was in Penang Free School, a premier school in Penang. He worked with Guthrie for a while,then entered Hong Kong University to study medicine. At the age of 29, he graduated as a doctor.After 6 months housemanship in a hospital at Hong Kong, he returned to Penang and opened a clinic. The clinic was located opposite the Kuan Ying Teng Temple or 88, China Street, Penang. His clinic was popular due to his love and kindness for his patients, charging low fee or even provide free medical services for poor community. He married the daugther of Kapitan Chung Thye Phin(1879-1935)and his first wife Lee Sau-yeng，Chung Yuet Kuen or English name Louise.(郑大平元配李秀英女儿月娟（露丝）适杨清添医生)

He is also known as " Doctor for the trishawmen"(三轮车医生), he is one of the doctor who helped the hardcore poor of Penang community, the trishaw man,and as panel doctor for their association.

His clinic was later sold to Dr Ting Hock Nan(丁福南医生),who later become a popular politician in Penang. Dr Ting was once practiced at a 24 hours clinic in early 80s, I was once visited his clinic in the mid-night due to food poisoning. I cannot remember where is the clinic,seems to be either Perak Road(near Padang Brown) or Macalister Road(Seow clinic?), at that time 24 hr clinic was rare. Dr Ting must had bought the clinic from Dr Yeoh after leaving the 24 hr clinic, it may be early 80s.

The following are some comments on Dr Yeoh, extracted from some Chinese articles: