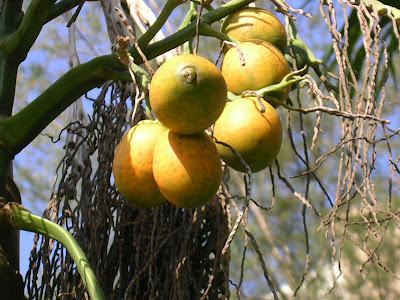 The Pinang fruits or Betel Nuts 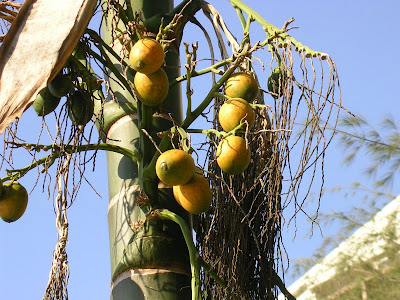 Pinang, the Malay word for a species of palm commonly called Betel Nut Palm or biologically it is called Areca catechu. It is commonly grow in tropical Pacific Asia and part of Africa. The Pinang tree is medium size palm tree, growing in about 20m tall, with a thin trunk. The fruit or betel nut is red orange in colour.

The betel nut is popular with the Taiwan, Malaysia, and India people, they always chewed the fruit(betel nut) with the betel leaves ( a leaf from a vine of Piperaceae family, some even mixed with white kapok. The Penang and Malacca nyonya chewed betel nut as their past time. The Taiwanese even has stalls selling betel nuts along the highway. Sometime beautiful young girls are employed as promoter to attract the highway customers. They called the female promotor, Pinang Xi Shi. The betel nut or areca nut contained alkaloids such as arecaine & arecoline( a stimulant that color the teeth and the mouth red when chewed), which when chewed is intoxicating and is additive. Medically it is used to treated intestinal worms. 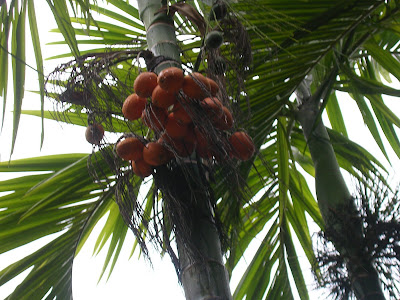 The Pinang tree on the left was found at the junction between Brown Road and Burma Road, Penang. It is the state symbol of the Penang state. It is difficult to see Pinang tree in Penang now. There was the call by Penang people to plant more Pinang trees in Penang.

Penang, a state of Malaysia, is located at northwest coast of Malaya Peninsular, by the Strait of Malacca. Penang was given to British East India Company in 1786 by Sultan of Kedah,in exchange for protection against the Siamese and Burmese. Some books said that the island was found by Captain Francis Light(1740-1794) on 11-8-1786. But I personally not agreed with the view, Penang is known as Pulau Pinang(Island of Betel Nuts) by the locals. It was renamed Prince of Wales Island by British. The island had been found long before Francis Light come......

Penang has been called Pulau Ka-Satu(First Island) by early Malay, and Binlang Yu(檳榔嶼 ) by Admiral Zheng He of Ming dynasty during his expeditions to the South Sea in 15th Century. It is not possible that Penang was found by Captain Francis Light?. It was either found by the earlier Malay, or may be by earlier Chinese, or by early Indian or other seaborne traders of spice trade......

When Francis Light landed in the island, there were reported 58 fishermen, including 3 Hakka chinese in the island who came in 1745, earlier than Capt Francis Light by 41 years (note: The three Hakka was known as Tua Pek Kong by Penang Chinese, there is a temple in Tanjong Tokong in remembrance of them). The others must be some Malay. It was also reported that when Captain Francis Light landed in the island on 17-7-1786, there was a Captain China Koh Lay Huan (吉打华人甲必丹的辜礼欢)from Kedah visited him, come all the way from Kuala Kedah together with some Indian Christian. Captain Francis Light only claimed Penang Island for the British empire, and did not found Penang; he can only said to have found Georgetown; not Penang Island.

The capital of Penang is Georgetown. In 1826, Penang , together with Malacca and Singapore become part of The Strait Settlement under British administration from India, but in 1867, the Strait Settlement was under direct rule from Britain as crown colony. In 1946 (1-4-1946) , Penang become part of Malayan Union, and on 1-2-1948, part of Federation of Malaya. The Federation of Malaya become independent from British rule on 31-8-1957. All Penangites become Malaysia citizen by operation of law. On 16-9-1963, Northern Borneo states of Sabah and Sarawak joined Malaya and formed Malaysia.

The island was a free port until 1969. Despite the loss of free port status to Pulau Langkawi, the state become an industrialised state, it build up one of the largest electronic industry base in South East Asia under the former Chief Minister,Tun Dr Lim Chong Eu. The industry was in the free trade zone in Bayan Lepas, near the Penang airport located at the south of the island.

Penang was declared as UNESCO World Heritage site on 7-7-2008.

Penang should plant more Pinang trees, and hope to see more betel nut used as brand names, symbol, in art and in every circle of Penang's daily life. This is to reflect the true identity of Pulau Pinang, Island of betel nut.