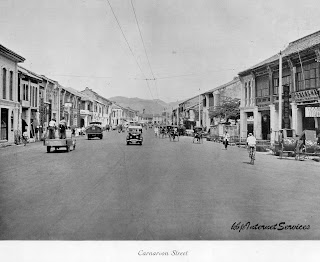 Historically Carnarvon Street沓田仔 is located on the north-eastern side of Prangin River(now no more) was called Lam Chan Nah, meaning " poor quality swampy fields". It was swampy area before it was reclaimed. It starts from Jalan Dr Lim Chwee Leong(former Prangin Road 港仔墘 ) and end at Chulia Street(牛干冬) .

The street was reported created in 1860's, it was named after the 4th Earl of Carnarvon Henry Howard Molyneux Herbert(1831-1890) , he took over the title Earl of Carnarvon from his father in 1849, an Oxford scholar, who was the Under-Secretary of State for the colonies in 1858, and Secretary of State in 1866. He is credited for introduced the British North America Act in 1867, which conferred self government to Canada. (Note: The town and county in Wales to which the title refers are now usually spelt in Welsh as Caemarfon, the anglicised spellings of Carnarvon has been obsolete in Wales since 1970's. The royal town is in Gwynedd, North East Wales.

It was the street of coffin and book shops in early Penang. Some said it also smell of medicine, as there are many clinic there. At the end of the street from the Komtar, used to be Siah Boey (or Prangin wholesale market), the central wholesale market for whole of Penang. But it had since been demolished for future development. The clinic of Tun Dr Lim Chong Eu or Soo Beng Dispensary (思明藥房)was once there, at the corner and end of the road, just facing Siah Boey. It was found by his father Dr Lim Chwee Leong(林萃龍醫生). Dr Lim started his political career here, his strongest supporter "Boh Mia Si" was from here. (Note: Tun Dr Lim Chong Eu(敦林蒼祐) is the former Chief Minister of Penang). The building is still there, now occupied by the brother as an architect office.

Most of the chingay & funeral procession will pass through this street during the old days. The tram passed through here. It was the street, which was filled with activities in the day time, where the students looking for books, the locals looking for foods; but night was quite, may be it was due to the coffin shops located in the area. 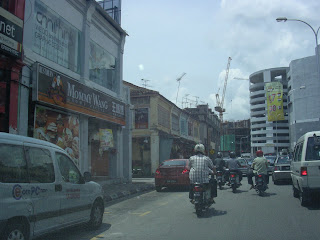 The street toward KOMTAR or Prangin Road. The clinic of Tun Dr Lim Chong Eu used to be at the right corner near Siah Boay (now demolished). Siah Boay literally meaning " tail end of the society or community". The old folks used to say that the place next to Siah Boay and part of Siah Boay were damaged by the air strike by Japanese warplane during WW2. The air strike was mainly due to the bullock carts or rickshaws parked along Prangin Road(now Jalan Dr Lim Chwee Leong, who is the father of Dr Lim Chong Eu). The Japanese warplane pilot thought that the bullock carts and the rickshaws , with their handles facing skyward were anti-aircraft machines. There used to be Prangin ditch(previously Prangin River) along Prangin Road(between Maxwell Road & Pragin road, which run parallel to each other) at the central of the road. There was a small wooden bridge crossover from Pragin Road to Maxwell Road(Maxwell road no longer exist, as it was now frontage of KOMTAR). Beside the bridge, there was an old apple tree, folks said it was an apple tree which sometime bear small apples. My auntie told me during WW2, my grandfather, together with his cousin jumped into the Prangin ditch to escape bombing from the Japanese plane.

The Prangin Road used to be the main bus station hub for the three bus companies in Penang. The Hin Company(blue color bus travelled the Tg Bungah/ Teluk Pahang route), Yellow Bus(owned by Loh Boon Siew, travelled the Jelutong/Balik Pulau route), and Lim Seng Seng Bus(green bus travelled the Air Itam route). Not forget the Capital cinema(at the end near Penang Road, just beside Li Teik Primary School) and Paramount cinema (beside Penang Chung Hwa Confucian High School(檳城孔聖廟中華國民型中學). Nearby are also two cinema(mainly Chinese movie) and Great World Park(one open air cinema inside), an entertainment hub. Now all these buildings had demolished for the KOMTAR project. This was the place where I spent my childhood and primary school days.

From Jalan Dr Lim Chwee Leong turn to Carnarvon Street, on the left begin with single storey semi-permanent shops, a fruit stall followed by a porcerlain shop, which are still around. After a small lane is two shop houses(now coffee shops), then the clan house for Zhang or Chang or Teoh or Sek Teoh Kongsi, where I used to go there to visit my old classmate during school days. The kongsi was founded by Cheong Fatt Tze. Sometime this place is called Sek Teoh kongsi Kay( 姓張公司街). There used to be a stall at the entrance of the road to the clanhouse, selling almond and soya water, but no more there. After the clanhouse, is another row of shops which included spartpart shops, Chinese sinse, tyre shop, and finally end with a budget hotel/coffee shop, before Hong Kong Street.

On the right after Tun Dr Lim's clinic, are row of shops selling prayer items , before reaching Prangin Lane (Lorong Prangin). Prangin Lane is also known as Kiam Hu Tia(鹹魚埕 literally means salted fish yard), should be selling salted fishes in the old days, as the Chinese names indicated. This is the street one of my closest classmate stayed, I used to go to his house for games and comic books reading. He no longer stay there. The corner house on the left of the entrance to Kiam Hu Tia was the home of one of the popular Malaysian Chinese singer Li Yi, who passed away at young age. He was knock down by a car, while crossing the road in Cheras, Kuala Lumpur. The shop used to be a spare part shop. 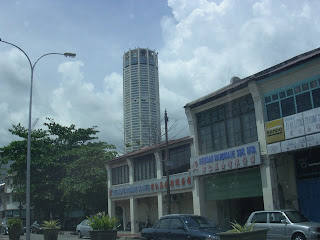 The view of KOMTAR from Carnarvon Street. This place used to have row of double storey pre-war shops, but some have demolished. The road beside the vacant land is Hong Kong Street(Hiang Kang Loa), now changed to Cheong Fatt Tze Road. It has one famous coffee wholesaler, and is active during the 9th month of the chinese calendar year. There is one temple of Kow Long Ya there. 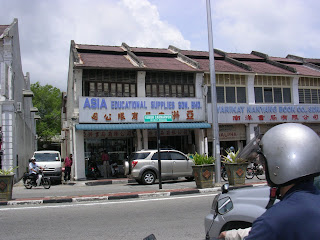 The road sign clearly shown the name of the street, Carnarvon Street or Lebuh Carnarvon, just opposite the Asia Book Shop. The corner unit of Asia Book Shop was once a tyre shop. (note: The owner of Asia book shop is now owned a main board listed company, Asia File). Beside the Asia Book Shop is another popular book shop, Nanyang bookshop. Next to Nayang bookshop was dead business paper shop Fook Seng(ko chua tiam), follow that was coffin shops, and another dead people paper shop(Lau Kim Ho), then a Hainan coffee shop, all these shops have closed.

These area, at the central part of the street are famous for both coffin shops(Hock Lian Seng, 福聯成), now called funeral parlor, and book shops. The place are busy during school holiday especially when the time to start the new school terms. Students and parents will come all the ways from various part of Penang to buy school books for their children.

The shop house beside Asia bookshop, across the lane or Lorong was once a residential house occupied by the nyonya family, with many of colonial and nyonya antiques filled the house, the couples had since passed away and the shop house sold. Now it is a bicycle shop. The house should have retained as museum by the family members. We lost one of the valuable heritage.

The side lane beside Asia Book Shop lead to Kimberley Street, at the back of the shops, there used to be an opium den, and coffin making workshop. This is the dark side of the street.

In the old days, how did the coffin maker transport their raw material and completed coffins?. The Chinese coffin unlike western coffin is heavy and make from hard wood. At the time when the motor vehicle (lorry)are not around yet, how did they move the coffin to the cemetry or customer's or deceased's house?. The answer is by using the water transport, the coffin maker will use prangin river to transport the raw material, timber logs from habour or beach front to Carnarvon Street, and transport the completed coffin by Prangin River to the sea front jetty. The coffin will be taken by coastal water to the cemetery at Mount Erskine area. The completed coffin will be download at Sia bui, which was not only wholesale market but jetty for goods, marine food/dried fish and even coffin...... 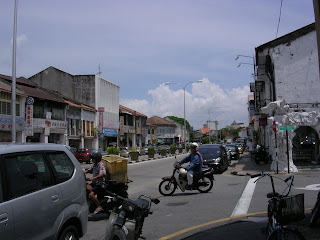 Carnarvon Street at the junction with Malay Street 台牛後(Lebuh Melayu). The corner coffee shop at the Malay Street (Thai Gu Aw or literally means killing ox at back lane) was a popular shop those days in sixties, especially for Char Koay Teow. There is also one fruit stall beside the shop, the stall is still around today. Opposite the fruit stall is a corner shop house, where it used to be a pohpiah skin shop, the owner will start the fire in early morning and start to make the pohpiah skin in front of the shop. Later it was converted into a bookshop, now bookshop is no longer there. Beside the pohpiah skin shop is a bicycle shop owned by my classmate's family. In those days, bicycle was main mode of transport. After the bicycle shop is Chinese book shops, and after a small lane,the corner shop is wholesaler for imported Chinese goods(Doi Guan Ho), then followed by coffin shop, before you reached Carnarvon Lane.. 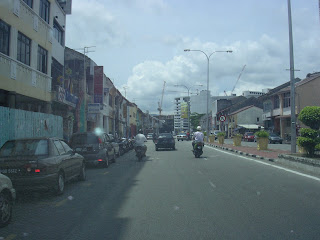 The view from the centre of the street. Opposite on the right lead to Kimberly Street(Swatow kay 汕頭街 ). At the corner of the junction, same row with Li Teik Primary School, there is a coffee shop which is still popular for the fried oyster (Oh Chian). On the left was the Carnarvon Lane(Lorong Carnarvon) or Kam Pung Lai 鑑光內(literally means inside the village) 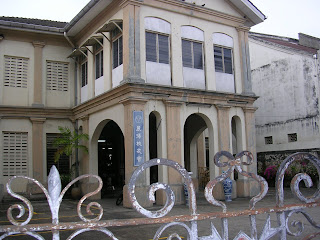 The old building, 152, Carnarvon Street, was once the home of wealthy pepper trader, Khoo Teong Poh, a prominant member of Khoo Kongsi. It become Li Teik Siah(丽泽社), in 1921. Li Teik Primary School(麗澤學校), a Chinese primary school was established by the Li Teik Siah, once youth club,now an old non-profit organization in Penang. I was a student for my primary 1 to 3 here. The school is no longer operated here, it has shifted. It used to be an art exhibition venue for the pioneer artist during the pre-war days. Still remember eating the Ice ball, the fine ice was make into a ball by hand, and then covered the ball with red and brown syrup. The stall was at the corner of Kimberly Street/Carnarvon Street junction.
There used to be a police station after the Li Teik Siah and row of pre-war shop houses, where one of famous skin clinic owned by Dr Gan was among the row of the shop houses. Opposite is the Chong clinic. 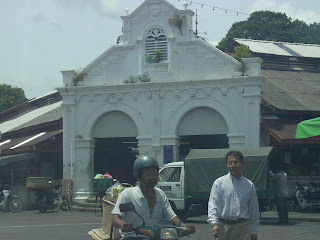 The Campbell street wet market, at the end of Carnarvon Street, near the junction with Campbell Street(Shin Kay 新街 or literally mean new street). The wet market is a heritage by itself. I used to follow mum to this wet market during my childhood days. The market is still popular until today.
The other end of the street at the Campbell street(新街) junction, where the Campbell Street wet market(or Sin Kay Tau, the head of new street) is located. After the wet market is the rows of shophouses which are mainly sundry shops or restaurants, it is also part of open air marekt where the hawkers will sell their wares/goods in open air. The Chinese called this stretch of road Toa Mui Lau Hang Kay大門樓橫街(literally means big archway cross road ). The road end with Chulia Street(牛干冬).
Posted by Boon Raymond at 12:33 AM