Campbell Street (新街)is located between Penang Road(槟榔路) until the junction of Carnarvon Street (沓田仔)and Buckingham Street(新街头),where the Campbell Street Market is located. Across the junction, the street is Buckingham Street which will lead to Pitt Street or Jalan Masjid Kapitan Kling (椰脚街)where Kapitan Kling Mosque is located. It is within the buffer zone of the George Town World Heritage Site.

Campbell Street or Lebuh Campbell in Malay language, is named after Penang Inspector General from 1866-1891, Sir George William Robert Campbell(1835-1905) , he was also the acting Lieutenant Governor of Penang between 1872-1873. In the book "Gentlemen Capitalist" by Anthony Webster, published by I.B.Tauris, 1998, in pg 182, the following was reported , " George W.R. Campbell who was temporary Lieutenant Governor of Penang in 1871, during the priod of leave for Anson. Campbell submitted a report on the Perak situation to the Colonial office at the end of June 1873,while en route to Britain".

is best known for his contribution to the Ceylon Police and British Colonial Police System. entered colonial law enforcement following military servive in . Assigned the task of reorganizing the Ceylon Police Force in 1866, he followed the military model exemplified by the Roayal Irish Constabulary . Among the innovation implemented by was a compound –arrangement whereby police lived together with their families in virtual military enclaves to ensure easy mobilization in the event of emergencies. also instituted proficiency exams, procedure directives, and impartial program of promotion and reward. (source: Chales Philips and Allan Axelrod, CCC, 1996)

Campbell was the Chief of Rathnageri Ranger, Bombay Police. He was appointed as Chief Superintendent of Police to be in charge of Ceylon Police Force on 3-9-1866. This date is celebrated as Police Day in Sri Langka. In 1867, as per Police Order Act No 16, this rank was confirmed as Inspector General of Police(IGP). Campbell was the first British colonial Inspector General of Police for Ceylon(now Sri Langka)


The local Chinese called it Sin-kay(新街), which means new road in Chinese Hockkien dialect. It was a red light area, line with brothels with red lanterns hanging outside their premise to indicate the place is a prostitute den. So sin-kay in Chinese, is also sound similar to the words "new prostitutes or fresh hookers". The new arrival of the prostitutes are located here,normally Cantonese. In those day, prostitutes den were legal, and one of the revenue farm, similar to opium den under British rule. The Malay called it Jalan Makau, in reference to Macau(澳门) , a port city from which the Chinese laborers and prostitutes arrive from. Macau was one of the treaty port after Opium War, where the coolies and prostitutes were "export" as part of the human trade. It was also called sin-toa-mui-lau(新大門樓), the new archway.

In the 50s to early 70s, the Campbell Street was famous as shopping street . Penang people go there for clothing, shoes, watches and other household items. Before the Chinese new year, this street were crowded with new year shoppers. The business declined in the mid 70s, after the opening of supermarket, the Oriental in Penang Road, near Capital cinema, and another in Chowrasta Market building(they are all gone), and mushrooming of the supermarkets and shopping complex. The previous state government tried to revive the street, with the concept of Medan Lebuh Campbell , with the construction of RM2.3million pedestrian walkway by MPPP. It was opened in July, 1999, but was a total failure.

On the left and right of Campbell Street are the side roads, on the right are Jalan Kuala Kangsar(瓜拉江沙路), which lead to Chowrasta Market; Cintra Street(日本横街), where the old Chinese restaurants, biscuits shop and Yau Cha Kui shop are located; Jalan Pintal Tali or Rope Walk (烟筒巷、义福街), where you can find some old relic of Penang if you are lucky. All the three side roads will join with Kimberley Street (汕头街)where there is an active street food stalls at night. On the left from Penang Road, the Cintra Street (where you can find the famous dumpling stall at night) and Jalan Pintal Tali continue their ends toward Chulia Street, the backpacker's heaven.

The road are popular with sign boards hanging vertically on the shop column and horizontally on the forecade of the shop. It covered up the beautiful architecture of the colonial shops. Penang has no standard policy on the showing of the name sign for the shops. The tourists will not be able to appreciate the beauty of the architecture if the building are covered with the advertising sign boards/materials. Unlike the old colonial shops, the names are engraved on the wall colume or wooden name board hanging on the upper part of the front door. This will allow to reveal the beauty of the shop architecture. This reflected the wisdom of the pioneer Penang traders. Today advertisement boards are everywhere, without control by MPPP. The Heritage City status to George Town, was partly due to the existence of the colonial shop building, if the tourist cannot see the actual shop buildings, there is no meaning for the tourists to walk in the street. It is time MPPP has a standard policy for colonial shops in the Heritage zone. 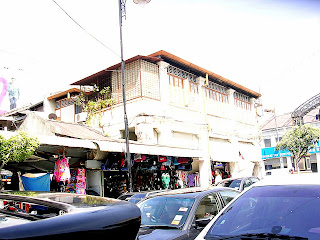 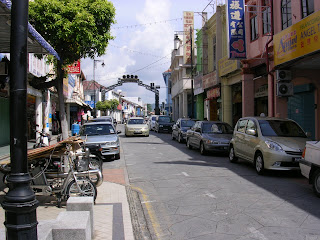 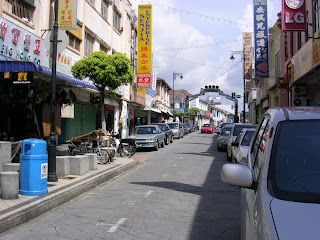 The view looking from Campbell Street to Penang Road. 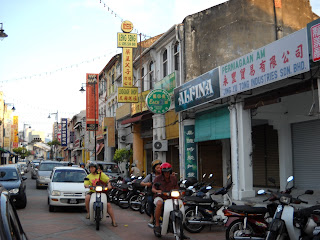 The Campbell Street (between Jalan Kuala Kangsar and Penang Road) 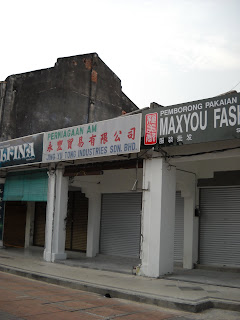 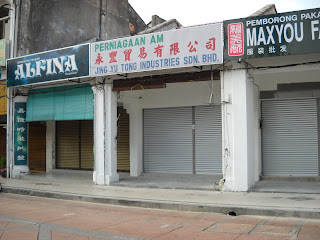 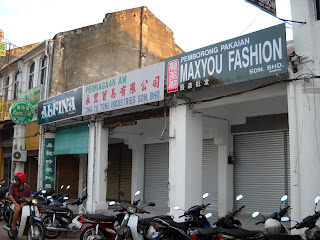 Three old shops opposite Jalan Kuala Kangsar were reconstructed after the war.The shops were bombed by the Japanese plane during WW2. Look at the shops,they are only rebuilt with single storey,where the right are double storey and the left are three storey building. The three storey buildings are common in Campbell Street before WW2. 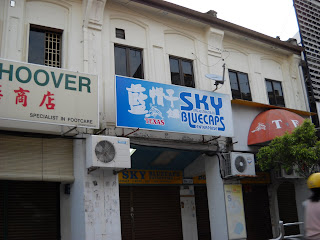 These three shops are double storeys shops,newly renovated, the neighbouring shop on the right are old 3 storey shops. The double storey shops are opposite the land lead to a cinema,now an entertainment outlet. The cinema was popular to the local in the old days, normally showing Chinese movies. The location may also had been bombed by the Japanese plane during WW2. 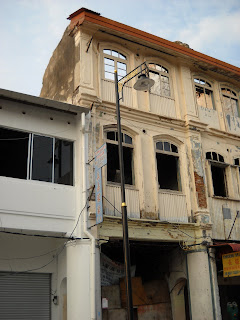 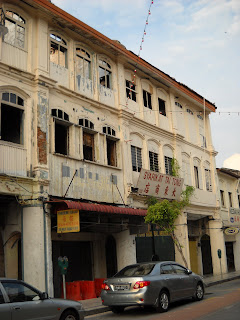 The three storey shops,typical of Campbell Street before the war. 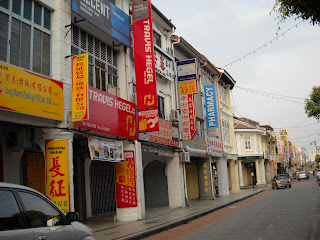 The street is no longer popular with the shoppers. Look at the sign boards, which are common in Campbell Street, Can you appreciate the beauty of the colonial shop building with these sign boards around? 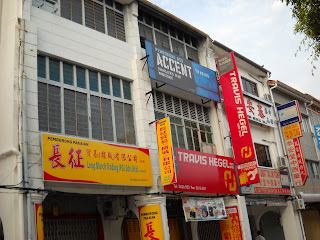 It was the most popular shopping street before the supermarket come to Penang.For my mum and grandmum.... 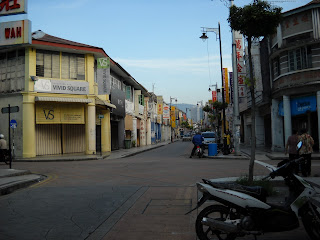 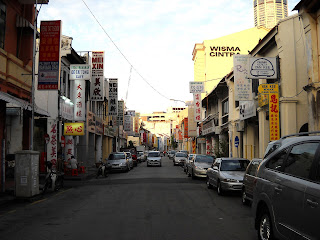 View from the Campbell Street toward KOMTAR 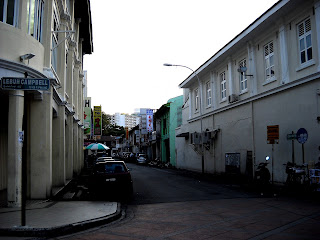 The entrance of Cintra Street toward Chulia Street 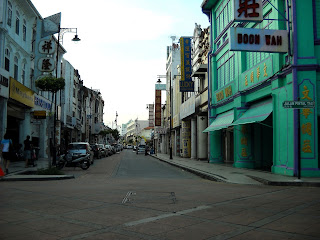 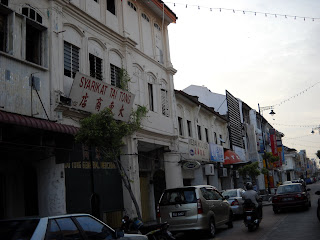 Another view of Campbell Street 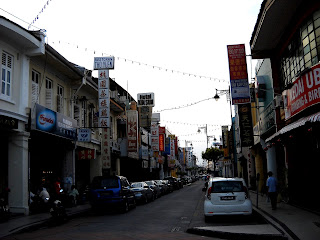 Cambell street, between Cintra street and Jalan Pintal Tali. The famous dim sum restaurant is on the left. 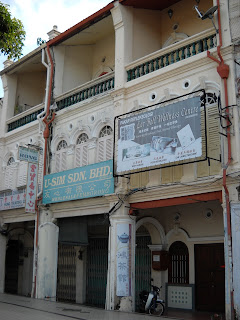 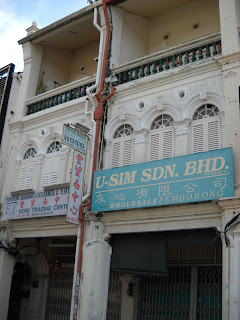 This is the typical 3 storey shops found after Jalan Pintal Tali, toward the Carnarvon Street/Campbell street market. This part of the road is famous for jewellery shops. 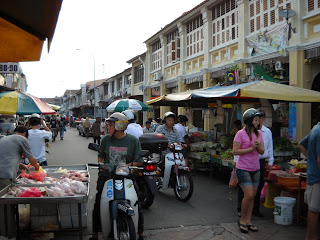 This is the Carnarvon Street to Chulia Street, where the morning street market is open daily. 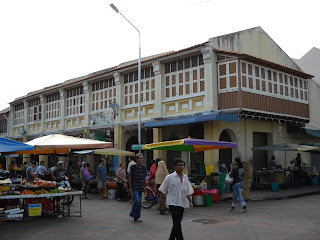 The juction between Buckingham Street, Carnarvon Street and Campbell Street. Look at the newly renovated shops, which is owned by the Indian Muslim Trust. Formerly the shops were rented to Chinese traders, after the abolishment of Rent Control Act, some of the traders may have moved due to higher rental. 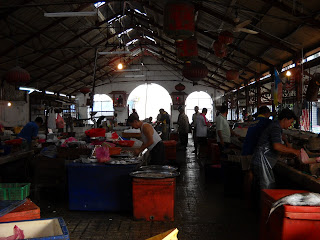 Inside the Campbell Street wet market 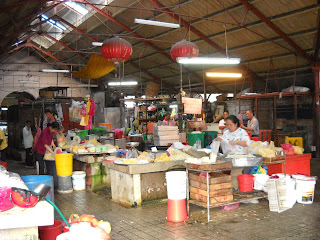 Compared to Chowrasta Market, it is less busy 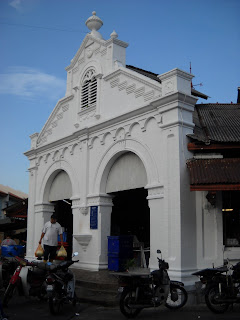 The entrance of Campbell Street Market
Posted by Boon Raymond at 12:31 AM