Jalan Nagore(那莪路)is between Jalan Burma(車水路) and Hutton Lane(惹蘭亞丁)named after a town in South India, Nagore. Nagore or Nagoor, is a town in Nagapattinam district, Tamil Nadu, India. It is 4km north of Nagapattinam. In Nagore, there is a Muslim shrine or dargah Meeran Sahib Qadir Shahul Hamid Badshah, which is a spiritual shrine in South India; dedicated to 16th century Muslim saint , Nagore Andavar or literally the Lord of Nagore. It is also popularly called Meeran Sahib or Qadir Wali. It is a pilgrim center. The 14 days festival Kandoori Urs is celebrate here. In Penang, Nagore shrine is located at the corner of Jalan Chulia/King Street junction. The design of the shrine,like the one in Nagore is a mixed of Hindu and Muslim elements.It was constructed in early 1880,it is the oldest Indian Muslim shrine in Penang. 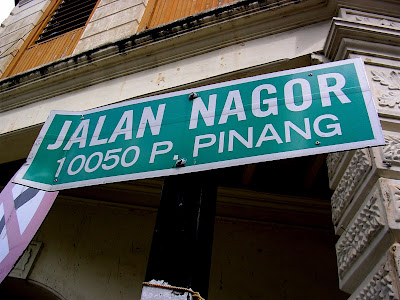 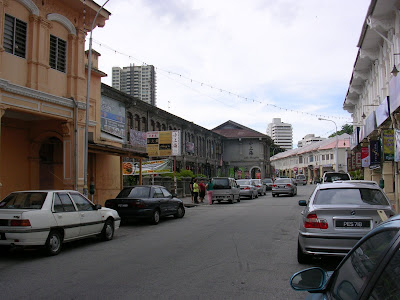 The view from Burma Road(車水路)

It was also reported that there was a Jewish synagogue located at No. 18, Jalan Nagore, formed long before 1932, which was closed down in June 1976. I explored the whole street, and asked a few old locals, they do not remember any synagogue there. It was reported that the synagogue closed down because it cannot meet the quorum of minyan, which is the quorum of 10 or more adults(age 12 and above) to meet for public religion purpose. The synagogue was having the Saturday prayers at the upstairs of a converted terrace shop house, it must be in secrecy with low profile , even the locals were not aware of it.

The houses in little Shanghai, between Jalan Bawasah and Burma Road, were mainly Chinese upper class residential houses , now converted into a row of restaurants especially for night business. The Nagore Place, between Jalan Bawasah and Hutton Lane, were double storey colonial houses, formerly may be mixed Indian Muslim and Chinese houses, now are also restaurants and food outlets. 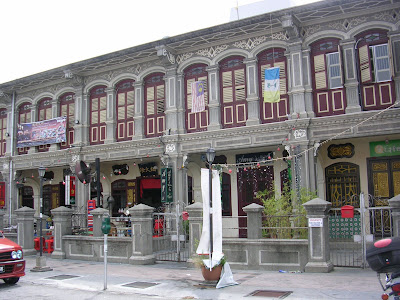 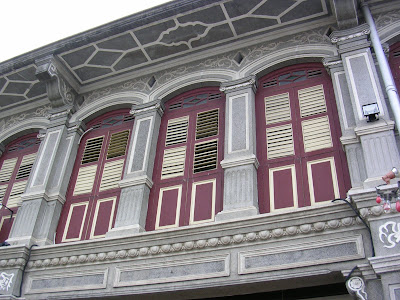 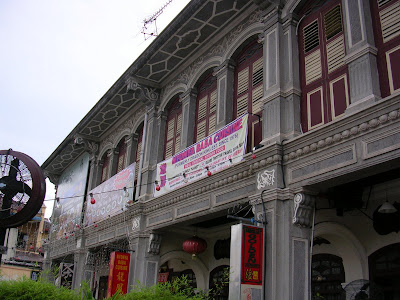 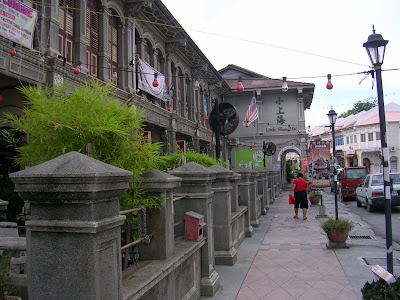 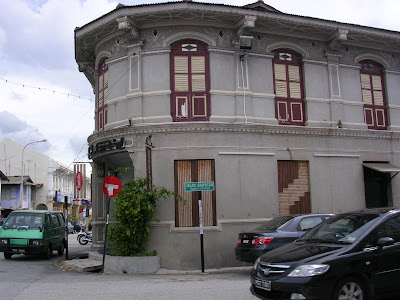 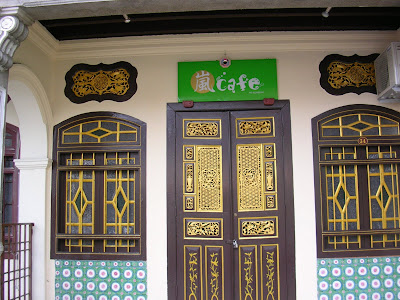 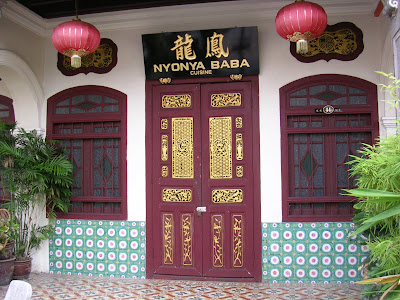 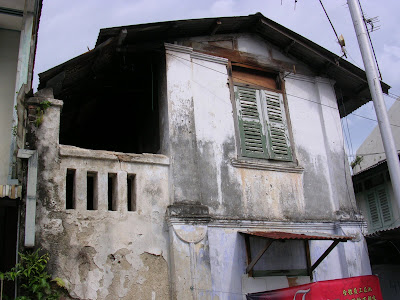 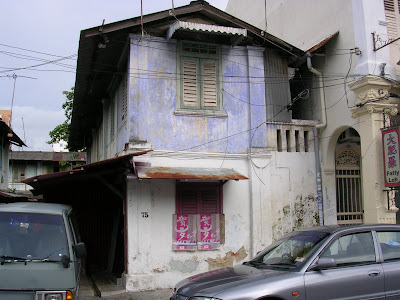 This double storey houses, looked like the stable house at Jalan Muntri; is opposite the little Shanghai. After this house toward Jalan Burma is the famous Fatty Loh Chiken Rice(大肥罗鸡饭店) at 77-79, Nagore Road. 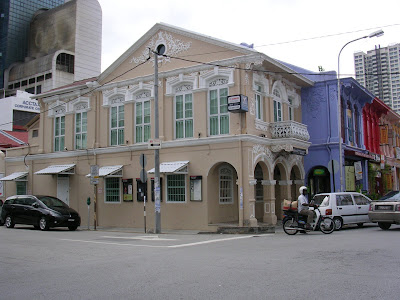 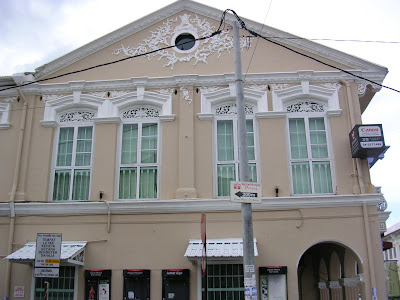 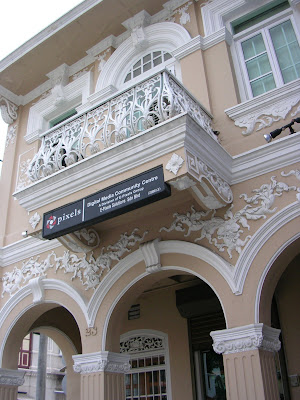 Cross the Jalan Bawasah (which connected Jalan Larut to Swatow Lane), this elegant building proudly stand at the left corner. It housed the office of Digital Media Community Centre.Opposite is the lane connected to the famous Swatow Lane, where the newly opened New World Park (Sin Sek Kai新世界)is located. 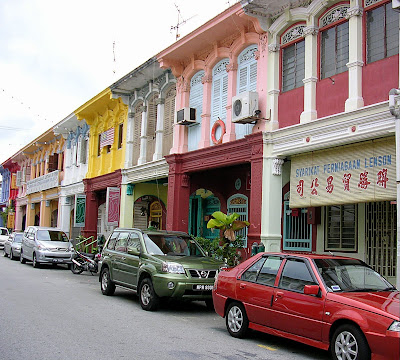 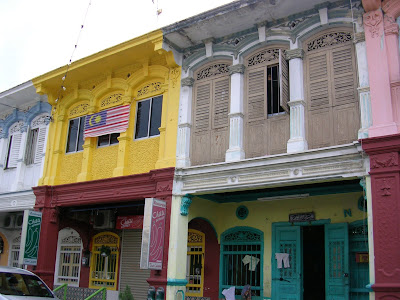 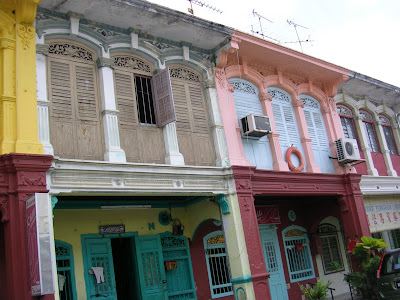 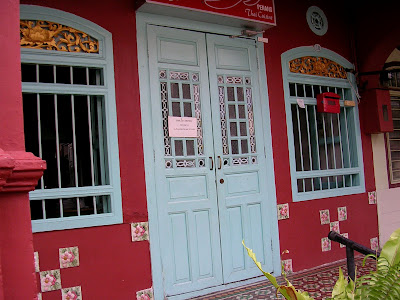 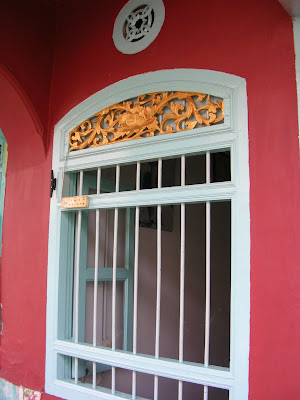 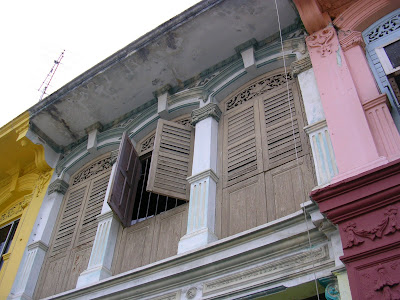 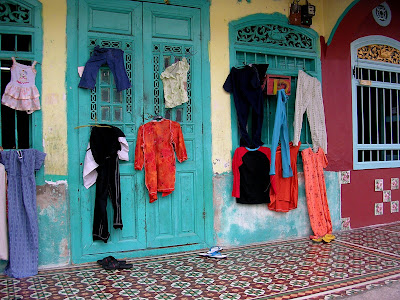 The colorful row of double storey, even one of the house have their colorful clothing hanging outside the door and the window. The row included the Chilli Corner, which occupied two houses, but the two units are separated by the house which hanged the colorful clothing. Most of the houses in the area have converted into shops, offices, and restaurant/cafe. It seems that this is the only unit which are still used as house unit by an Indian Muslim family. 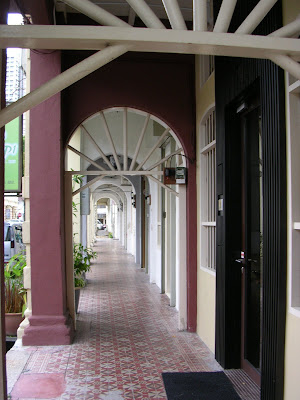 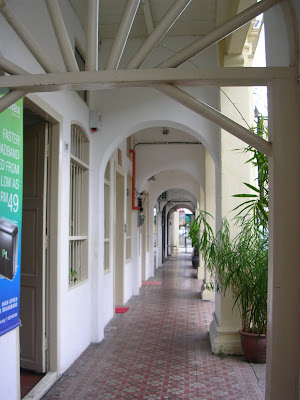 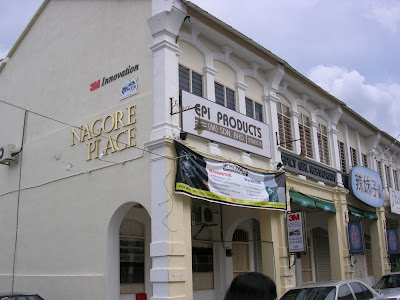 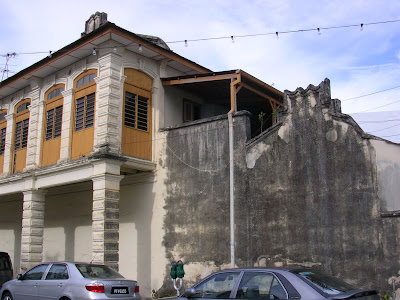 This is from the Hutton Lane or Jalan Hutton (惹蘭亞丁)left side; after this house facing the Hutton Lane, crossing the back lane is the row, with the wall clearly painted Nagore Place. The Nagore Place include Spicy Girl Restaurant, siTigun cafe(15-17, Nagore Road) .... 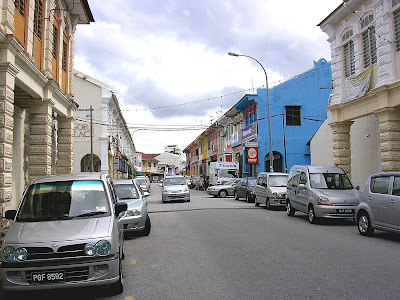 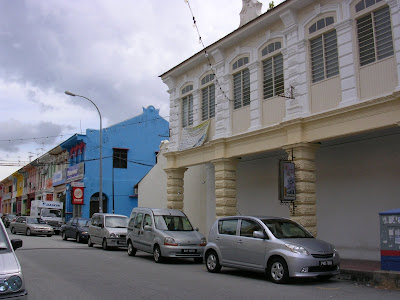 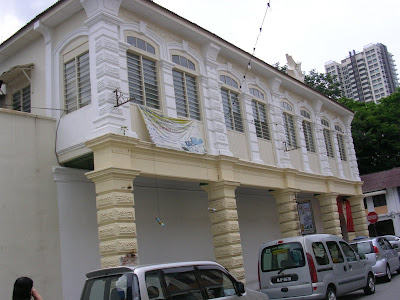 This is the view from the right side of Jalan Nagore, from Hutton Lane entrance. The building is actually facing Hutton Lane. After the back lane, there is the colorful row of houses.

Still remember the house with colorful clothing hanging on the door and window; they are Indian Muslim and may be from Nagore. They may be a community of Mamak(The Indian Muslim, as called by Penang people) from Nagore or Colomendel Coast in the past in the area, the people from there are called Chulias.

The area was originally a residential area; but many of the houses are now converted into shops, mainly restaurants.
Posted by Boon Raymond at 4:48 AM