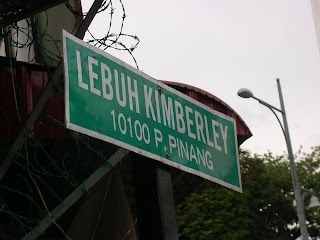 Kimberley street was also known as Teochew street(潮州街) ,Mee Sua Kay (麺線街 or rice vermicelli street) , Seh Te kosi kay (姓鄧公司街 or Te clanhouse street); Pa Sua Kia Hang(拍索仔巷 or rope maker street). But it is commonly called sua-tauh-kay(汕頭街)by old Penang people until now. Sua-tauh is Hockkien dialect for Swatow city, now Shangtou city(汕頭) in Guangdong Province, China. The city is a port located within the Teochew area. Most of the early Teochew and Hakka people from the area, departed to Nanyang(south sea, which means countries around south of the China Sea or South China Sea)from the Swatow port. This port city is significance to many oversea Chinese. Kimberley Street is a Teochew streeet

At the Carnarvon Street junction is the famous Kedai Kopi Seng Thor coffee shop & hotel at 160, Carnarvon Street,which is famous for fried oyster. At the other end is the junction with Penang Road,just opposite the Penang Police state headquarter. This end where the photo of the street sign board was taken, is normally lined with stalls selling leather goods, or other sundry goods.

In between the two ends are the food stalls, which are popular especially at night. From Penang Road, there is a short side road Kuala Kangsar Road on the left of Kimberley Street, which lead to Chowrasta Market; and opposite on the right, there is the side road(also Kuala Kangsar Road) if turn right will lead to the lane, Keng Kwee Street where the famous Penang Road Teochew Chendol is located, just beside Joo Hooi Cafe ( 475, Penang Road). The Joo Hooi Cafe is famous for its Char Koay Teow, and Penang Laksa. If you take the chendol from the road side into the coffee shop, the owner will charge you table charge.

I used to walk along the street during my childhood days, mainly to visit a relative renting a room at one of the shop house, near the entrance of Chowrasta Wet Market; and also to follow mum to visit the morning market at the place. At that time the market is the most famous and busiest wet market in Penang. 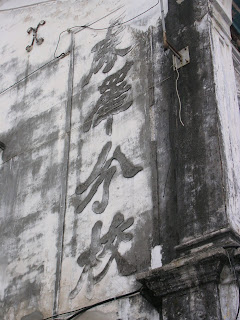 It was a surprise discovery that the Chinese Calligraphy on the side wall of the shop house, which was unoccupied for some time , but some repair is being done currently. The Chinese writing on the wall stated that it was once Li Teik Branch School. 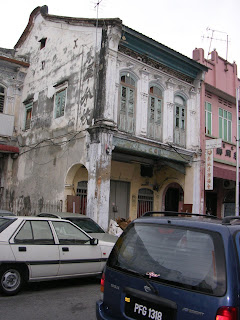 The shop house must be used for the Li Teik Chinese School branch school during the pre-war days. 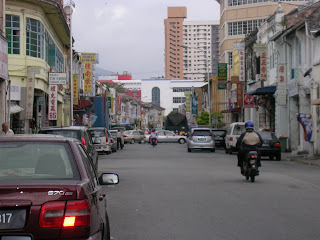 This photo was taken at the centre of the street toward the Penang Road end of the Kimberley Street.This is the most active part of the street. The Char Koay Teow of the road side stall at night is popular. During the childhood days, we used to drink soya drink(soy bean drink) at the stall located near the corner of the junction with Cintra Street. The area is a food heaven at night. This is the view toward Carnarvon Street ,which is with much less activities. At the left from Carnarvon Street, among the row of shop houses immediately after the back lane, was a nyonya kuih shop (kuih is Malay words for Chinese style rice flour confections), which used to distribute the nyonya kuih to Indian sellers. The Indian seller sell the nyonya kuih together with laksa noodle. The shop now no longer opened. On the right from Carnarvon Street, the row of shops after the famous fried oyster coffee shop was the girl tailoring school(Pinang tailoring school) owned by Lim family, and another shop owned by a Chinese bone sinseh(驰誉星马、泰、缅的骨伤科名醫) Loh Cheng Chuan(駱清泉), who was the founding President of Penang Art Society in 1953, a keen art collector. He passed away in 1966. His eldest son Lok Tok( 駱拓)was one of the famous Chinese artist in China now residing in Ontario, Canada. He studied under famous Chinese Master Xu Beihong徐悲鴻 (1895-1953) in Beijing. Mater Xu Beihong was Loh Cheng Chuan's good friends, & Lok Tok's god father; he hold various art exhibition in Penang. One of his other son was my schoolmate from Li Teik Siah primary school , but I had lost the contact.

There is one famous Teochew restaurant , Goh Huat Seng Restaurant , located at 59A, Kimberley Street. Famous for their steam boat, teochew style. The restaurant has been there for more than 50 years.
Posted by Boon Raymond at 5:58 PM